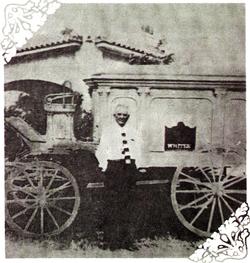 The year was 1908, and the tradition begins when a young man of 26 years, W.A. White, began his career in Springtown, Texas, a career that would encompass more than a century and four generations of changes in the funeral industry.

W.A. White began selling coffins for the general mercantile store.  Most coffins of the time were made of native woods with only some being finished inside. Moving to Poolville in 1913, White worked for Ward, McDonald and Doughty Mercantile, again specializing in the selling of coffins.  A man of great vision and foresight, White’s dream of owning and operating a funeral home began to take shape.

In 1914, following the death of the local embalmer, White moved to Weatherford and began his own undertaking company on the south side of town.  Customary of the time, most funerals were held the day after the death.  The deceased was carried by horse-drawn hearse to the church for the funeral service and from there to the cemetery.  When embalming became a common practice, it was first performed by the embalmer in the home of the deceased.

A man of vision, White could see the day coming when the funeral home, and specifically the funeral director, would become an important factor in making funeral arrangements.

Soon the funeral director no longer visited the home of the deceased in preparation of burial.  Instead, the practice of bringing the deceased to the funeral home became more  accepted. As newer, more progressive health standards were developed, White was among the first in adopting them.

With the growing importance of the funeral home came the need for a larger, more adequate facility.  In 1930, White built the original funeral home in Weatherford at 130 Houston Avenue, which serves as the home office and where members of the White family and staff continue to conduct funeral services today.

With increasing business came the need for help.  Relying on members of his family, including his brother, J. Herschel White; his son, Ford White; and his son-in-law, Morris Sands, another member of the White family began learning the family business just as his father and grandfather had.  Bob White is the current president and third generation owner of White’s Funeral Homes.  They were also extremely fortunate to acquire the services of Charles Hamilton, who went on to work with White’s Funeral Homes for over 50 years.

The most important innovation pioneered by White’s was the W.A. White Burial Association, organized in 1940.  One of the first organized burial insurance companies in the state, it was designed specifically to help anyone wishing to pre-arrange funeral services and thus taking the burden off the family, a burden which can be emotionally taxing and financially overwhelming.

Original burial policies were written in the amount of $150, however, as time passed, White and his son, Ford White, saw that this insurance was not adequate.  In 1952, the White’s Service Insurance Company was established to write policies with values up to $2500.

In 1954, W.A. and Ford White returned to Springtown to start another funeral home.  W.A. White’s wish was to return to his “old home place” and start another facility which would be more convenient for the people in that area.  White wished to thank the residents of Springtown and Poolville for allowing him to gain a foot-hold in the funeral industry in Parker County.  Following in his grandfather’s and father’s footsteps, Bob White acquired funeral homes in Azle and Mineral Wells in 1986 in order to provide quality funeral care to residents in those areas as well.

In 1980, Bob and Carolynn White bought the established Memory Gardens of the Valley Memorial Park on the Mineral Wells Highway.  They have beautified the grounds, adding many amenities making it one of the most beautiful cemeteries in the area.

With increasing pre-arranged funeral sales, the accounting and maintenance of such plans became more than the local funeral home could handle.  In 1988, Bob White joined several other independent funeral directors from West Texas in Funeral Director’s Life Insurance Company, now a company of nearly 1 Billion dollars in insured pre-need plans, making it one of the largest providers of pre-arranged funeral plans in the United States.  Bob White continues to sit on the board of directors of FDLIC.

It is nice to know that some things in life never change.  Bob’s father, Ford White was a long time funeral director and business leader in Weatherford.  Bob has served on many civic, church and fraternal committees and was recently honored as Funeral Director of the year in 2012 by the North Texas Funeral Director’s Association.  Bob recalls ”as a funeral director, I’ve learned that knowledge is gained through training and experience, but most of all is gained from a true desire to serve our fellow man in the best way possible.”

Today, White’s Funeral Home is still a pioneer and innovator in their industry.  They offer a wide range of services from traditional services, to cremation services and pre-arranged funeral plans.  While there have been many changes in funeral service these last one hundred years, the staff at White’s Funeral Homes stand ready to accept the challenge of providing the needs of our community for the future.  In 2012, Bob and Carolynn White’s daughter, Anita White, joined the staff to continue on the tradition with four generations of service.