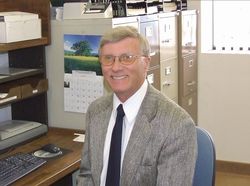 Patrick Lind was born, raised, and educated in Illinois. He worked part time in a local funeral home in 1960 and moved to California in 1961 to begin his internship and studies in the field of Mortuary Science. He graduated from the California College of Mortuary Science in Los Angeles in 1963. He worked in Los Angeles and Oxnard before purchasing the mortuary from Mr. and Mrs. Starbuck in 1974. He made two major renovations before selling the business to the Grants in January 2006.

At the end of 2006, Patrick will have completed 46 years in the funeral service profession. He currently is a consultant at the business and plans to pursue other interests, including travel, at the beginning of the new year.