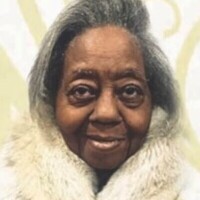 Mrs. Wilma G. Lolles, in her 88th season of life, "passed through the Pearly Gates" on Sunday, June 14, 2020 from Oklahoma City, Oklahoma.

Wilma Gene Lolles was born on March 4, 1932, in Cane Creek, Oklahoma to the parents of Lawrence Wright and Annie B. Howell Wright. She attended Manuel Training School in Muskogee, Oklahoma while raising her three younger brothers.

Grandma Lolles accepted Christ at a young age and soon married the love of her life, Danie Lolles Sr., and to this union five children were born.
Grandma Lolles loved to cook and was famous for her fried chicken, pancakes, beans, and corn bread. She admired her grandchildren and would often take them on trips to the grocery store and told them to get whatever they wanted to put in their baskets. She had an open-door policy and allowed many visitors to frequent her home for food or shelter. She was Grandma Lolles to everyone!
She will be greatly missed, but never forgotten!

Friends may visit Mrs. Lolles on Thursday June 18, 2020 from 1PM until 6PM in Muskogee.

Graveside Services will be Friday June 19, 2020 at 12Noon at The National Cemetery in Ft. Gibson, OK.

To send a flower arrangement to the family of Wilma G. Lolles, please click here to visit our Sympathy Store.