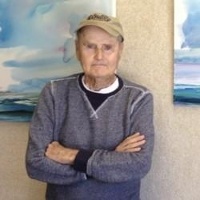 The world lost a beautiful soul on August 7, 2019.  Bill Richardson, age 88, died after contracting a cold. His family was with him when he died, and friends visited him throughout the day.

He is survived by daughters Mette, Karin (Aaron), Heidi (Ray), and his dearest friend and caregiver Londa.  We miss him more than words can say.

Bill was a joyful, kind, straightforward, no-nonsense, and funny person.  He served around the world in the Air Force, retiring in 1974.  He lived in Lompoc for almost 50 years.  He was an artist since his teen years, winning many awards, and his work is on display around the world.

A celebration of Bill’s life will be held on Sunday, August 25, 1:00 pm, at the Lompoc Veteran’s Memorial Building.