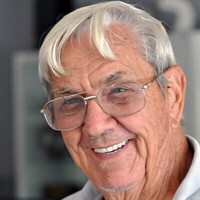 William Edward Newman, Sr. passed away on May 8, 2020 at the age of 91. “Bill” was born on June 20, 1928 in Meadville, Pennsylvania to the late William and Nina (Wiseman) Newman. He was a resident of Camellia at Deerwood in Jacksonville, Florida.

Bill graduated from Meadville High School in 1948, enlisted in the Army in 1949 and eventually trained as a combat photographer. He married Virginia Downs of Baltimore, Maryland on August 28, 1950. Two months later, Bill was in Seoul, Korea in the midst of a war. He captured on photo many moments including patrols, rebuilding of structures, troop movements and POW assignments until January of 1952. In October of 1952, he was honorably discharged and returned to Baltimore to be with his bride, “Ginny.” Bill worked for 20 years with Crown, Cork & Seal and from 1955 to 1965, attended night school. He obtained a B.S. degree in Engineering from the University of Baltimore; a first to graduate college in his family.

Bill and Ginny went on to raise three babies living in Randallstown, Maryland, St. Louis, Missouri and Cleveland, Ohio. Eventually, they moved back to the Washington, DC area in 1975 while Bill took on a new position with U.S. Postal Service to design a new national Bulk Mail System. They later moved to Jupiter, Florida in 1984 working with the Air Force (AFPRO) office. Bill was a Supervisor of Manufacturing Management, performing audits and evaluation of contracts. He received countless awards from the Air Force redesigning processes that saved the government millions of dollars.

After November 1989, Bill devoted his retirement to tending to his wife, spending time with friends, and playing golf, golf and more golf. But his underlying joy came from visiting with his children, grandchildren and great grandchildren. In 2015, Bill & Ginny moved to Jacksonville, Florida.

William will be interred at Jacksonville National Cemetery on Friday, May 15, 2020 in a service arranged by Peeples Family Funeral Homes, 14165 N. Main St., Jacksonville. A memorial service for both Bill and Ginny will be held at later date. Donations are accepted in lieu of flowers in memory of Alex Newman to Alex’s Dragonfly Coalition, 731 Duval Station Road, Suite 107-346, Jacksonville, FL 32218 or the Wounded Warrior Project, P.O. Box 758516, Topeka, Kansas 66675-8516.