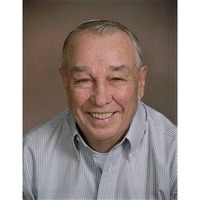 Wayne Warren Custer, age 84, born December 20, 1935, of Annandale, formerly of Lakeville, died Sunday, September 13, 2020 at The Lodges in Elko knowing he was loved. He was born at the hospital in Cokato, MN, the youngest child of ten, and the only one to be born in a hospital. He grew up in Howard Lake, MN on the family farm near Rice Lake. At the age of 17, he forged his mother’s signature and enlisted for 8 years in the Marine’s, spending his 18th birthday in Japan. In 1956, Wayne married V. Kaylene Oothoudt, they lived in New Hope, MN and had 3 children: Kevin, Kim and Kurt. Wayne went to Dunwoody College and became a tool and die maker for Stampings of MN in Minneapolis. Stampings of MN moved to Lakeville in the late ‘60’s, and Wayne’s family followed a couple of years later. In 1978, Wayne married Sally Slette and they remained in Lakeville until their retirement. Wayne and Sally retired to Annandale and lived on Lake Sylvia, where they loved to host their family and dear friends and neighbors. Wayne and Sally were very connected to their community, active in their church and supporting the local schools.  They were fans extraordinaire; you could always see them in the stands on a Friday night. Wayne was an avid outdoors man, always respectful of the earth and wildlife. He loved to hunt and fish with family and friends, and unless there was a Twins or a Vikings game on, you would find him outside. A genuinely good guy, loved by all who knew him, Wayne leaves behind his brother Dean (Carolyn) and sister Delores Wessman, children Kevin (Karen), Kim Dresselhaus (Jim) and Kurt. Step children Greg Slette, Bob Slette (Jody), Sandee Woessner (Gary), and Steve Slette. Grandchildren Dave and Jenny Dresselhaus, Erin and Kris Custer, Gunnar Slette, Lynnea Slette, Cory Davis, Allison Rhodes, 6 great grandchildren, and many, many nieces and nephews. Those having gone before, his parents Warren and Agnes, his loving wife of 41 years, Sally Custer, brothers Jim, Bud, Amos and Donald, sisters Pearl, Gen and Eve. Sadly, due to Covid concerns, the family will be having a private memorial and burial service with White Funeral Home in Lakeville (952-469-2723). Please know that you are in our hearts. Memorials in Wayne’s name can be made to: Disabled American Vets, Angel Fund of Annandale Schools, DNR Nongame Wildlife Fund, or any charity dear to you. Teach a kid to fish! Condolences: www.whitefuneralhomes.com