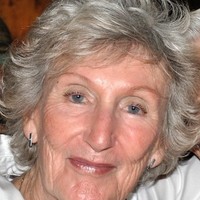 Virginia Augusta Downs Newman passed away peacefully on March 28, 2020 at the age of 90. “Ginny” was born on October 12, 1929 in Baltimore, Maryland to the late Herbert and Pearl (Vain) Downs. She was a resident of Camellia at Deerwood in Jacksonville, Florida.

Ginny graduated from Patterson High School in Baltimore, Maryland in 1948 and married William Newman of Meadville, Pennsylvania in Baltimore on August 28, 1950. She was a proud stay-at-home Mom to her three babies living in Randallstown, Maryland, St. Louis, Missouri and Cleveland, Ohio. Eventually, Ginny and “Bill” moved back to the Washington, DC area in 1975. She worked at Bolling Air Force Base there in the procurement department and later moved to Jupiter, Florida in 1984 working as the lead Procurement Officer for the F-15 Strike Fighter Aircraft engine. In 2015, Ginny and Bill moved to Jacksonville, Florida.

Ginny took joy in shopping, tending to her husband, chatting with friends, attending service at Church of the Redeemer, and most of all, spending time with her children, grandchildren and great grandchildren.

Virginia will be interred at Jacksonville Veterans’ Cemetery in a private service. A memorial service will be held at later date and arranged by Peeples Family Funeral Homes, 14165 N. Main St., Jacksonville.

To send a flower arrangement to the family of Virginia Newman, please click here to visit our Sympathy Store.