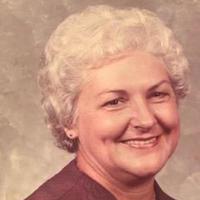 Visitation will be Saturday, September 21, 2019, from 9-10 AM at Fairview Baptist Church, Columbus, MS. Funeral service will be Saturday, September 21, 2019, at 10 AM at Fairview Baptist Church with Bro. Sammy Crawford officiating. Interment will be in Friendship Cemetery with Lowndes Funeral Home directing.

Mrs. Ford was born January 18, 1926, in Memphis, TN to the late Ruth Wilson Owens and Finis Owens. She graduated from West Point High School, West Point, MS and was a resident of Columbus, MS since 1946. She was a member of Fairview Baptist Church.  Mrs. Ford was an incredible seamstress and an artist who enjoyed painting.She worked at Byars Mcgrath Clothing, Columbus Motor Company, Builders World and The Health Department.  In addition to her parents, Mrs. Ford is preceded in death by her husband-Thomas “Jack” Ford, Jr., sisters- Gwen Liebeler, Jewelle Johnson, and Ann Millsaps.

Memorials may be made to Fairview Baptist Church 55 Plus Group 127 Airline Rd. Columbus, MS 39702 or Margaret Lackey Offering for State Missions.