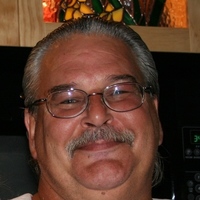 Shawn Ray Crawford died March 10, 2020 at his home in Lebanon, TN. He had suffered from debilitating, chronic pain from injuries that had resulted in fractures of his back and right ankle. Shawn underwent surgeries to repair the damage, and despite the impairments lived a full life.

Shawn was born in Columbus, Ohio, raised in New Jersey and spent his adult life between Tennessee and Ohio. As a youngster he had a reputation as a dare devil from the age of 2. He was known to run and dive into a baby pool with no more that 6 inches of water, come out without a scratch and emerge with his trademark mischievous smile.

From an early age, he matched that devil may care attitude with a solid athletic ability. In high school, he earned All-State honors as a center on the football team and was an outstanding diver in AAU Competition. He attended Fairmont State College in West Virginia on a Swimming/Diving Scholarship.

Shawn served in the Navy in the ‘Silent Service’. One of his Dad’s proudest moments was traveling to watch Shawn graduate and earn his designation as a “Submariner”. He was eventually stationed at Groton Connecticut and completed missions out under the sea.

When Shawn returned to Tennessee, he attended Volunteer State Community College to pursue a career in drafting. As he was working toward his degree, the drafting world was shifting from mechanical drawing to Computer Aided Design. Shawn had an artistic ability which he could capitalize on with drafting. That touch was muted by the computer and that fact lead Shawn to go out on his own and chart a new course.

Shawn returned to Columbus Ohio to work with his Uncle Marvin. They both shared a love for and ability to fix almost any mechanical device or motor. Shawn worked with Uncle Marvin in high rise building maintenance and eventually earned his own 15 story building to manage.

It was at this time that Shawn met and married Terri. They had two boys, Nick and Hunter, opened their own landscaping business and bought their own home. One of Shawn’s accomplishments each year was to outdo his neighbors in the Christmas lighting competition. In classic over the top Shawn fashion, he put up what seemed to be endless numbers of lights on the house and trees. It sure helped that his Aunt Nina managed a store that sold most of those lights.

Shawn and Terri divorced and Shawn moved back to Tennessee to be around his family. His sister Kelly found him what he said was his lifelong dream - “a simple home by the river where I can fish”. When he moved in, Shawn planted gardens, had a fire pit and many days of fishing.

Shawn was preceded in death by his parents Carl and Betty Crawford and his grandson Shane. He is survived by his sons Nick (Kasey) Crawford, Hunter (Summer) Crawford, their Mom Terri Crawford, and his grandchildren Bridget, Amanda and Logan all of Columbus, Ohio.

Shawn is also survived by his family, sisters Dare Bible of Colorado and Kelly (Jeff) Lawrence of Lebanon, Tennessee, brothers Chuck (Heide) Crawford of Nashville, Tennessee, Scott (Brandi) Crawford of Petersburg, West Virginia and Craig Crawford of Helena, Montana. Aunt Margie Cochran of Newark, Ohio and his Uncle Charles ‘Sonny’ Costolo of Fort Pierce, Florida. Also there are many nieces and nephews that have amazing stories to tell about their “Unky Shawn” and numerous cousins and members of his extended family.

DUE TO TRAVEL AND GATHERING RESTRICTIONS, SHAWN'S MEMORIAL SERVICE WILL NEED TO BE POSTPONED AND RESCHEDULED. PLEASE CHECK BACK ON THIS SITE FOR MORE INFORMATION.

Please sign the Guestbook for the family and take a look at the photo gallery.