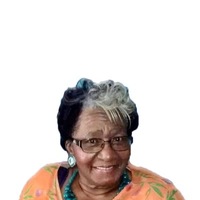 On May 30th of 1937, a beautiful baby daughter was born unto Edgar McNac and Agnes Virginia Sallis McNac in a small area of Fort Gibson called “The Hollow”. Her name... Sarah Jean McNac.

Sarah grew up a country girl, learning all the basics of being a true woman of virtue. She attended Nero Elementary School and then graduated from Lincoln High School in 1957.

Sarah met and married Walter E. Brown in 1959 and to this union 9 children were born, 5 sons and 4 daughters. Sarah and her husband were entrepreneurs: they owned and operated a store/social club on Four Mile Road called “Brown’s Grocery.” People from the Four Mile area and all around would come buy groceries or just come to mingle and have a good time. They were known for their hospitality and love to the community.

Later in life they moved to the Warner area where they operated an 80 acre farm raising cattle, gardening, and living the good life. Sarah canned vegetables, jellies, and preserves from all the goods from the farm. They shared these goods with people in the community and abroad. Sarah taught her cooking and canning skills to her daughters and others who desired to know.
Sarah worked for a number of companies during her younger years before becoming a homemaker (Swift’s Packing Co., Hamlins El Toro, Corning Glass, and The EOHDC to name a few. Later in life they moved to Summit, Oklahoma and continued the farming and country life on a 160 acre farm. Her husband, the late Rev. Walter E. Brown became ill and preceded her in death in 2011.

Later in the year of 2011 she moved in with her daughter Sandra K. Logan in Oktaha, Oklahoma where she continued to share her wisdom and knowledge in gardening, cooking, and canning. Throughout her time living with them. Her son-in-law Gary Logan said that he gained several pounds, because of her good cooking of pies and cakes.

In 2016 she moved in with her daughter Pamela Logan and again she devoted her time, wisdom, and knowledge. Teaching not only her daughters; but her granddaughters and others who desired to know, her cooking and gardening skills and how to be a wife. A repeat of her son-in-law Michael Logan, too gained several pounds because of her good cooking. She was always lively, full of laughter, and willing to help whomever she could. She devoted time taking care of her brother Edgar McNac through his illness before the Covid-19 pandemic.

During the last few months of Mother’s life she would often talk about The Most High God’s hand upon this world. She stated she knows that God is moving and his will is being done in these last days. She celebrated her 83rd birthday on May 30th of this year- was full of life, laughter and joy. The Most High came to call her spirit back unto him early Thursday morning on June 4th.

Those that preceded her in death; 1 child, her husband, mother, father, 6 sisters, and 4 brothers.

Her Sacred Farewell will commence on Saturday, June 13, 2020 at 2:00 PM in the most holy sanctuary of the First Deliverance Christian Center.  Pastor Marnita Archie is the gracious host and Pastor Walter Brown, Sr., will Preside.  Her Daughters will deliver Mother Brown's Eulogy.  Burial will follow in the Four Mile Branch Cemetery in Fort Gibson, Oklahoma.

You may visit Mrs. Brown, as she slumbers in sweet repose on Friday from 1:00 PM until 6:00 PM at the funeral home in Muskogee.

To send a flower arrangement to the family of Sarah Jean Brown, please click here to visit our Sympathy Store.