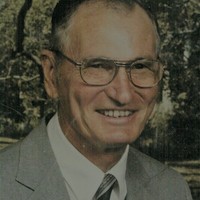 Rufus Lester Pumphrey, 91, passed away on Thursday, September 05, 2019 at his residence. A visitation will be held on Monday; September 09, 2019 at 10:00AM from the Seventh Street Church of Christ in Columbus, with funeral services to immediately follow at 11:00AM with Bro. Billy Ferguson and Bro. Paul Bennett officiating. Graveside services will be held at 3:00pm on Monday; September 09, 2019 from Arbor Grove Baptist Church Cemetery, near Houston, MS. Lowndes Funeral Home and Crematory is honored to be entrusted with final arrangements.

Mr. Pumphrey was born May 02, 1928, in Chickasaw County, MS, to the late Eddie L. and Cornelia C. Pumphrey. He served his country during WWII, while enlisted in the U.S. Army Air Corp, and later, providing service during the Korean Conflict, while enlisted in the United States Air Force. Always a hard worker, he retired from the maintenance department at Beliot Manhattan. After his retirement he worked at Sunflower in Columbus for 7 years. He also enjoyed working in his yard. Church of Christ by faith, he was a member of Seventh Street Church of Christ in Columbus. A devoted family man, he was a wonderful husband and father, who always managed to hold his sons accountable for their actions. He was a proud grandfather and wore his title of “Paw Paw” as a badge of honor. He loved animals, especially his cows and goats. Described as an “Individualist,” he was very knowledgeable of History, especially Civil War History and was always interested in political discussions.

He was preceded in death by his parents, six sisters and one brother.

The family requests that in lieu of flowers, Memorials be made to the donor’s favorite charity.