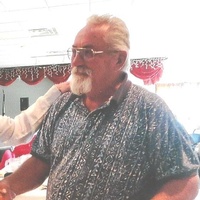 Robert T. Budde of rural Woonsocket passed away December 31, 2018 of pancreatic cancer at his home.

Funeral Mass services was  held Friday January 4, 2019 at 10:30 am in St. Wilfrid Catholic Church, Woonsocket. Burial was in the church cemetery with military rites, with Fr. Jim Friedrich officiating.  Visitations was held Thursday at the Basham Funeral Home, Woonsocket from 5-7 pm with a scripture service at 6:30 pm and one hour prior to service at the church on Friday.

Robert was born in Mitchell, SD to Theodore and Leona (Rassel) Budde. He attended grade school at Neilson and Budde Country schools until 1962.  Then going to Woonsocket High School, graduating in 1966.  He enlisted in the Woonsocket National Guard in 1966 serving 27 years.

Robert worked for Dakota Contracting Corp., working on various highway projects around the state for 42 years, until health issues forced him to retire.

He is survived by three sons; Dustin (Lisa) Budde of Sioux Falls; Chad and Tim Budde of rural Woonsocket. Robert was preceded in death by his parents, Ted and Leona, several Uncles, Aunts and cousins.