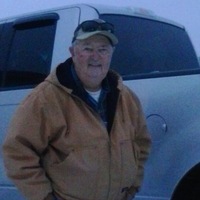 Bob was born on April 26, 1940 in Norfolk, the son of James William and Ora Blanche Garrett Gerry.  He attended Norfolk Grade School and graduated from Shelbina High School in 1958.  He was united in marriage to Glenda Dunkin on September 1, 1979.  Bob retired from GTE, with 38 years of being the local telephone guy.  He, then, went back to work as custodian at Madison High School until 2011.

Bob was a well-known outdoorsman with a huge love of hunting and fishing.  He enjoyed mowing and riding his 4-wheeler.

Funeral services will be held on Wednesday at 2:00 p.m. at Agnew Funeral Home with Reverend Donna Scott officiating.  Visitation will be from 12:00 p.m. until time of service on Wednesday.  Burial will be in Bethel Cemetery in Holliday.