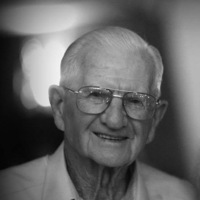 Robert Lee (Bob) Brown passed away on Wednesday, September 30, 2020, at the age of 97. After several years of declining health, Bob died peacefully at home on his farm.

Bob was born in Imogene, Iowa on July 19, 1923 to Robert James Brown and Luella Carolyn Dubois. He shared his birthdate with a twin sister, Betty who proceeded him in death. Bob followed his dream of becoming an engineer and attended Maryville College. WWII interrupted his plans, as he was ordered to either return to the farm or enlist. He chose to work on the family farm near Coin, Iowa which ended up a lifetime vocation with an ability to maintain his equipment, sometimes his engineering talents surfaced while designing the fix. In 1947 he drove a new combine with a wheat harvest team from Texas to the Canadian border. He told stories about sleeping under the stars and making a rope circle to keep the rattle snakes away. Bob was well known for his jokes, often keeping them in his front pocket – until they were memorized. It was little known, he secretly took flying lessons and loved to street box.

Bob moved to Missouri where he met and married Vera Louise Stewart of Moberly, Missouri. They were married on December 23, 1951 and made their first home on a farm within a few miles from his present farm that he purchased in 1954. Bob and Louise were married 53 years and have three children, Lona Yohe, Robert S Brown, and Jean Tompkins.

Bob joined the Lion’s Club in 1962 and has served as President. He has also been an active Moose and Eagles member. His interests included travel (domestic and abroad), music and dancing, and new vehicles. He was introduced to golfing later in life and by his 60’s was displaying a natural talent which ultimately led him to golfing at St. Andrews Course in Scotland as a member of the United Kingdom team against the United States and he proudly brought home a trophy.

Bob lived a good life, and definitely did it his way. He is loved by friends and family alike.

Graveside service is planned for Saturday, October 3, 2020 at 1:00 pm at the Sunset Hills Cemetery in Madison with Reverend Larry Thomas officiating. Agnew Funeral home is in charge of arrangements.

People wishing to honor Bob’s lifelong commitment to family and community can make donations to the Madison Lions Club in lieu of flowers.

To send a flower arrangement to the family of Robert "Bob" Lee Brown, please click here to visit our Sympathy Store.