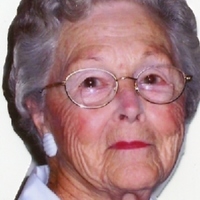 Phyllis Virginia Dixon, 104, of Madison, MO passed away on January 2, 2020 at the Monroe Manor Nursing Home in Paris.

Phyllis was born on April 23, 1915 in Shelbyville, MO, the daughter of Loren and Hazel Hammond Alpaugh. She graduated from Shelbina High school in 1933. After high school Phyllis attended Truman State University, where she received her teaching certificate. She taught in Shelby County at Ridge School for one year and Moreman School for four years; both of which were one-room schools and had all eight grades. She, also, worked several years as a clerk and store manager for Temple Stevens Grocery Stores in Moberly, MO. Phyllis was also a bank teller at the Madison Bank for 14 years.

She married Victor Sparks of Shelbina, MO on January 9, 1944. In this union they were blessed with two children; Ron Sparks and Donald Sparks. Victor preceded her in death on February 5, 1962. She later married Joe Dixon on December 5, 1965 and he preceded her in death on September 29, 1990.  Phyllis is survived by her son Donald (Midge) Sparks of Aurora, MO; daughter-in-law, Phyllis Sparks of Tyler, TX; Five grandchildren, thirteen great-grandchildren and several nephews and nieces. She was, also, preceded in death by her parents and one son, Ron Sparks in 2007; two sisters Nelle Myers and Joyce Claybrook.

Phyllis was always ready and willing to volunteer for any community organization. This included not only her church and clubs, but the Madison Community Center as well. At the center she would help with cooking and/ or washing dishes. She just pitched in and did what needed to be done. If she said she was going to do something you can be sure she will “Get-R-Done!” She was always ready to greet everyone with a friendly hello and a contagious smile.

Phyllis enjoyed the outdoors and weather permitting she would be out walking on her daily journey. She was known to walk 2 miles per day. She also enjoyed doing crafts and sewing. “When she talks of her family she just lights up.  Phyllis was a Pillar of the Madison Community and will be greatly missed by many.

Memorial service will be held at 2:00 p.m. Tuesday, January 7, 2020 at the Madison Area Community Center with Reverend Larry Allen Thomas officiating. Visitation will be from 12:00 until time of service on Tuesday at the Community Center in Madison. Burial will be in Sunset Hills Cemetery in Madison. Agnew Funeral Home is in charge of the arrangements.

Memorials may be made to the Sunset Hills Cemetery, Madison Lioness Club, Madison Area Community Center.