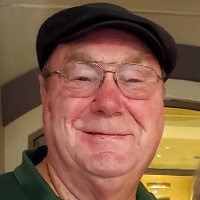 Paul was born on June 26, 1946 in Vinton Iowa to Marcella and Victor Young.  Immediately after graduating High School, Paul enlisted in the United States Air Force in 1965.  He married Nancy Pinkard in 1974 and raised two children, Scott and Megan, at Vandenberg Air Force Base.  He retired after 20 years of service in 1985 as a TSgt.  After retirement from the USAF, the family moved to their home in Vandenberg Village and he worked another 26 years at Lockheed-Martin as a Logistics Analyst before settling down into his second retirement where he could cultivate his extensive succulent collection and work within his wood shop.

Paul is survived by his wife Nancy, son Scott with his wife Chris and granddaughter Grace and his daughter Megan and husband Steve.  Paul is also survived by his daughter from a previous relationship, Lori O’Brannon and her children, Joshua, Jessicca and Josie as well as his great grandchildren Mavis and Finnely.  Paul has one brother Steve and three sisters, Claudia, Lynnette, and Lois.