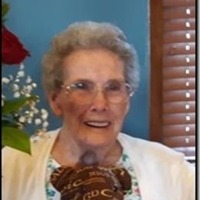 Norma Jean DeOrnellas, 91 of Paris, MO passed away on Tuesday, September 1, 2020 at the Monroe Manor Nursing home in Paris.

Ms. DeOrnellas was born June 3, 1929 in Howard, KS to Willis and Irene (Dowell) Putnam. Raised on a small farm near Florida, MO, she attended school at Casey College and Mexico High School. She worked as a secretary and was a member of the Harmony Baptist Church and as a ticket clerk at the Liberty Theatre in Mexico, MO.

She is also survived by three sisters, Betty Evans of Antioch, CA, Joyce Moore of Auxvasse, MO, and Kaye Knight of Mexico, MO and a host of nieces and nephews.

Preceding her in death were her parents, husband and three half-brothers, Merl, Hershall and Border Putnam, three brothers, Wilbur, Orval, and Carlos Putnam, one half-sister Arietta Chapman, and one sister, Violet Sharp.

Helping to run the family farm, Ms. DeOrnellas also served as Secretary of the National Farmers Organization, was a member of the American Legion Auxiliary of Post #221 and a member of the Historical Society. She loved gardening, ceramics, sewing, cardinals, cheeseburgers and ice cream, but most of all she loved her family, especially her grandchildren and great grandchildren.

Funeral services will be held at 12:00 p.m. on Saturday, September 5, 2020 at the Agnew Funeral home in Paris with Reverend Wesley Hammond and Reverend Steve Smith officiating. Visitation will be from 10:00 until time of service on Saturday at the funeral home. Burial will be in Walnut Grove Cemetery in Paris.

Memorials can be made to the Historical Society and the American Legion Auxiliary.

To send a flower arrangement to the family of Norma Jean DeOrnellas, please click here to visit our Sympathy Store.