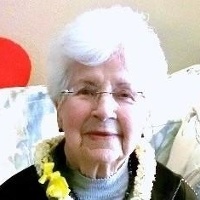 Our dear mother died in her sleep on August 22nd. She was 98.

Nettie was born to Theresa (Jardine) and Joe Rocha in Paia, Maui, HI, and raised on a sugar-cane plantation in Hamaku`apoko, Maui. She was the second to the youngest of nine living children and grew up helping her stepmother and her siblings with house and farm work and swimming at Ho`okipa Park (and getting into trouble) with her sister, Clytie. She attended Maui High School and served as captain of that school’s female basketball and baseball teams. Here, she developed a life-long love of volleyball, which happily she shared with her daughters.

After graduation, she moved to O`ahu to work at Liberty House. When she began work at Hickam Air Force Base, a young and handsome pilot from Texas, Capt. Jesse B. Dudley, Jr., took a fancy to her.

After WWII, she married Jesse, and they settled on O`ahu and raised four children. For her children’s benefit, she remained a stay-at-home mom for many years. At age 40, she and Jesse took up jogging, which they continued to do into their 70s. Her kids grown and in college, she returned to work at the Veterans Administration in Waikiki, occasionally jogging the eight miles home from work.

During retirement, she took up golf; worked in their Waialae-Kahala garden; crocheted beautiful doilies, tablecloths, and bedspreads; was the treasurer for a music society on O`ahu; read eclectically; and travelled extensively with her husband. In 1994, they moved to Oakmont Village in Santa Rosa, CA. She attended Star of the Valley Catholic Church and was a member of its Women’s and Newcomers’ Clubs. She was a member of the Oakmont Golf Club, joining TEASE and golfing as much as she could. Later in life, she became an Authentic Golden State Warriors Fan, flying their flag during every season!

She was predeceased by her “dahling” of 67 years, Jesse; her brother, Freddie, seven sisters, Helen, Mayme, Laura, Eva, Cecilia, Anne, and Clytie, and their spouses; a step-brother, Larry; a daughter-in-law, Mary Kate; a son-in-law, Darrell; a niece; and a nephew. She is survived by three daughters, Joanne and Barbara Dudley of Santa Rosa, CA, and Valerie McFeron of Seattle, WA; one son, Michael Dudley of Las Vegas, NV; her step-sister, Audrey “Ginger” Reed, of Maui; and her husband’s Texas family. She leaves behind a multitude of nieces and nephews, four grandchildren, seven great-grandchildren, and a great-great-granddaughter. Her family will miss her good (sometimes risqué) sense of humor; her diminutive smile; her big heart; her willingness to listen and to help; her mischievousness; and her good cooking!

The family expresses a special thanks to the staff at both Spring Lake Village SNF and Sutter Hospital (Vineyard View wing) for the exceptional care and caring that they gave to Nettie, as well as to the staff at Home Care Assistance.

Star of the Valley Catholic Church