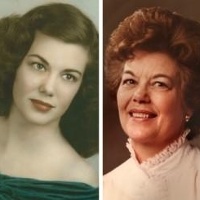 Nelene passed away August 17, 2019 due to her long bout with Alzheimer's disease.  She is survived by her husband, Edwin E. Jones of 69 years and their 3 sons, Mark (Lorraine), Paul (Julie) (twins) and Jeffrey (Christine), her brother Bobby C. Brown of Everett, WA., 7 grandchildren and 18 great grandchildren.

Nelene attended a Temple, OK country school for grades 1 thru 8, skipping her 8th year and becoming a teacher's assistant, graduating from Temple high school with honors in 1948.  As a child when not in school, you would most often find Nelene sitting under their mulberry tree with a book in her hands and listening to her favorite music...an avid reader from childhood that continued throughout her life.

Immediately after graduation, she went to work with Southwestern Bell Telephone Co. in Wichita Falls, TX as a telephone operator.  Within her first year, she was nominated and selected as the Wichita Falls 1948 Labor Day Queen...never more a prettier one!  She then transferred to Okla. City.  Peggy, Ed's sister sat at the switchboard next to Nelene.  Peggy told her that Ed was finishing his 3-year enlistment with the Army and would be stopping by to see her and that she wanted the two of them to meet.  Ed met Nelene when she stepped out of the lobby elevator on March 1, 1950.  It had to have been love at first sight because they were married May 6, 1950.

Ed was recalled to reserve active duty in Sept. 1950 for the Korean conflict and returned from Japan in August 1951.  Mark and Paul, twin sons were born May 14, 1951 while Ed was in still in Japan, so he did not see them until his return 3 months later.  Shortly after his return, the family moved back to Okla. City where Ed began his employment with the USAF at Tinker AFB.

In March 1958 the family transferred to Tachikawa AB, Japan to begin a 10-year assignment in Japan and Okinawa.  While there Ed's frequent and long lasting TDY's required Nelene to "man the fort" while he was away...many tasks requiring "true grit" to handle. Those were great years and considered to be some of Nelene's best times, a time with the many military clubs and entertainment available.  Many celebrities stopped there to entertain, including the likes of Mel Torme, the Supremes, Frankie Laine, Julie London and many more.  During that same period the family traveled to Hong Kong, Korea, Taiwan, Manila...learning much about customs and the culture of those countries.

From childhood, it was clear that Nelene was someone with very special natural God given talents. She began her cooking career when she was so small that she needed an RC Cola box to reach the countertop.  She greatly enhanced those skills by attending schools in Japan, Okinawa, Amsterdam and Brussels...a Julia Child you might say, but not limited to French cuisine.  Family and friends were always comparing her meals/desserts to those served in a Michelin 3-star restaurant.

Nelene was quite expert at other endeavors, e.g., shooting clothes pins off her Mom's clothesline with a .22 rifle, pitching a fast softball on her school team and even managing to pull a little cotton...let that not be forgotten!   As a child going to school, she faced those Okla. winters sometimes walking backwards to escape the wrath of blowing rain, wind and snow.  She gathered eggs, cleaned the cream separator and was the family's dishwasher.  While all this was going on, she was not without entertainment.  There was the family radio to listen to, the antics of the family dog "Puddles"and "Chico" their pet squirrel.  If that was not enough, there was the weekend Saturday matinee at the local theater for westerns or "cowboy" shows.  Whoever said that life in small town America was boring?

In August 1967 the family transferred to VAFB to begin a new assignment.  Being overseas 10 years was quite an adjustment, particularly with prices, i.e., 14 cent per gallon gasoline, 25 cent haircuts, and especially the Kobe beef filet mignon dinners with all the trimmings at less than $2.00.  As with everything else Nelene did, every aspect of getting into a new home and spending time entertaining the grandchildren with games of all types, coloring Easter eggs, baking birthday cakes, and in general catching up with all the grandmother things she missed while overseas.  It was a great time too for Nelene to enjoy making new friends, playing golf, bowling, more travel within the US, Mexico and Canada...visiting all the states except Nebraska!

In 1978, Ed accepted a new assignment on the Multi-National NATO F-16 Program at the Fokker Plant in Amsterdam working with the Dutch and Norwegian Royal Air Forces.  During the next 7 years, getting acquainted with the Dutch AF personnel and their families was a wonderful experience.  As the host Nelene treated those friends to many "open houses" featuring American specialties, sending cookies and candy to the office while also learning a bit of Dutch language in the process.  Nelene joined the American Wives of Amsterdam and the USAF & Dutch military tour groups that allowed her to travel whenever time permitted. Her travels took her throughout Europe, UK, East/West Germany and Egypt, visiting all the capitals and most of their museums, including the British museum in London, Versailles in Paris, Brussels, Pompeii, Oslo, Copenhagen, Vienna, Rome, Athens, Prague, Budapest, and Cairo. Her travels took her to more than 35 countries.

Nelene loved Egyptian history.  A 17-day tour that included a trip up the Nile from Cairo to the Sudan border, stopping at the Grand Pyramids in Giza, Aswan, Valley of the Kings, King Tutankhamun's crypt, Karnak, Ramses statues, Abu Simbel Philae, and Luxor.  This tour was probably the most memorable of all for Nelene as documented in one of her many photo albums.  Among those photos, in one she was sitting astride a camel with the pyramid and sphinx in the background.

During Nelene's childhood, she had been taught embroidering, sewing and quilting, anytime spent watching TV also included Nelene doing one or another of these crafts, eventually making an individual quilt for each of the 7 grandchildren.  Her Thanksgiving and Christmas dinners were magical in variety and taste.  All these things were exactly what Nelene wanted out of life and her strong faith in God assured that these things would be fulfilled.

Another of her loves was reading, she amassed virtually a library of books that covered essentially all subjects...when Nelene suggested that she lacked a college education, Ed reminded her that Lincoln was self-educated, telling her that he would personally award her a Master’s Degree in whatever field she chose, but that of a mother, grandmother and great grandmother would be descriptive of her lifelong achievements.  Since their marriage, Nelene dedicated herself to be a full-time wife, mother, grandmother and great grandmother.  We mutually declared that if you were to describe our lives, it could be said that she lived an "Osmosis career"...which is to say there was no original life's plan except through God's divine guidance.

Nelene was able to attend only one high school reunion, yet she retained close contact with her class-mates Peggy Darter and husband, Reeford. They were her closest friends and visited each other as often as possible and now has joined them in heaven...all doing God's will while here on earth.  God was always a part of their daily lives.  She loved and brought joy to all her friends and family.

Granddaughter Susan Nelene's mother, Dawn, died from cancer when Susan was only 5 years old. Susan lived with us much of her childhood as Paul continued his firefighting career working 24 hour shifts 72 hours per week.  As Nelene said "I always wanted a little girl and you are that little girl!!". Susan was raised and loved by Nelene over all those many years into adulthood.  Her devotion in raising a second generation family was another example of Nelene's empathy and caring.  Susan said recently that Nelene was the mother that she never had.  They shared a wonderful mother/daughter relationship.

Nelene was also very proud that Mark, Paul and Jeff were Vietnam veterans, Mark and Paul serving "in country" while Jeff with the Navy served in the waters off Vietnam...Paul serving 2 tours there and a one-year assignment in Iraq.

Nelene would especially want to thank all the staff at the Sunrise Care facility in Santa Maria and Dignity Health (DH) persons that cared for her over the many months before her death.  A special recognition of Jerry Pinada, Edith Tadena, Mr. & Mrs. Romeo (Emilia) Cardenas, Richard Lomboy and Dr. Katics, Kimberly Passmore from DH. Also, the family's gratitude to Dr. Rollin Bailey, Dr. B. Sinkaset, and Dr. Ente for their care.

A Celebration of Life will be held on Oct. 4, 2019 as a private ceremony for family and friends at Mark &
Lorraine's residence.  Donations may be given to the Wounded Warrior Project in Nelene's name.
Print Obituary