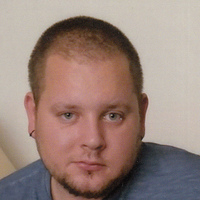 Nathaniel passed away unexpectedly at his home, August 3, 2020. He was born June 2, 1985, in Lansing, MI the son of Ronald and JoAnn Spenski. Nathaniel graduated from Grand Ledge High School in 2004 and attended the Electronics program at Lansing Community College. In 2012 the light of his life, his daughter Lucia was born. He was a member of St. Gerard Catholic Church. Nathaniel enjoyed art, fiddling with electronics and gaming with his friends. He was very good in his pottery and received a scholarship for college. His friends called him, “Power Man”. Nathaniel is survived by his parents, Ronald and JoAnn Spenski; daughter, Lucia Spenski-Fast; sisters, Merissa Spenski and Aubriana (Matthew) Bonnau; brothers, R. Joseph Spenski II, Dustin (Erin) Spenski and Justin (Phaedra Ramsdill-Spenski; nieces and nephew, Lilli, Carson, Vera, Desiree, Amara and Rosalie; uncle, Henry Spenski; aunts, Donna Dawson, Pamela (Jim) Key (godparents) and Maria Zdybel; cousins, Shayna and Sandi; best friends, Jason, Dan and Ben. Also surviving are his beloved cats, Fern and Ellie. He was preceded in death by his grandparents, Henry and Aldona Spenski; grandfather, Adam Buinowski Sr.; uncle, Adam Buinowski Jr.; grandmother, Genevieve (Staszuk) (Buinowski) Zdybel and step grandfather, Martin Zdybel.

There will be memorial graveside service at St. Joseph Catholic Cemetery on Friday, August 21, 2020 at 1:00 pm with father Jim Eisele as celebrant.  Condolences can be sent to the family at www.palmerbush.com. In lieu of flowers, memorial contributions can be made the family to help pay for expenses and also fund his daughter, Lucia, college education fund. The family is being served by the Palmer, Bush & Jensen Family Funeral Home, Delta Chapel. All contributions can be forwarded to the funeral home who will in turn forward that to the family; or there is an account Gofundme.com in memory of Nathaniel Alexander Spenski.