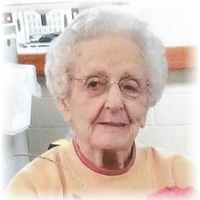 Murline Hamilton, 101, of Paris passed away on Monday, February 17, 2020 at the Monroe Manor Nursing home.

Murline was born on December 1, 1918 in Florida, MO, the daughter of Harry and Mary Alice Baker. She married Charles Hamilton in Hannibal, MO on November 30, 1935. He preceded her in death on November 9, 1985. Murline is survived by a daughter, Mary Jane Havens of Paris; four grandchildren, Shelley (Kevin) Sinkclear, Charles (Susan) Havens of Paris, Karie (Lindsay) Jones, of Columbia and William (Christopher) Parrish-Talk, of Sanford, FL; four great-grandchildren, Tyler Webb, Robyn (Casey) Lambert, Brody (Dakota) Lehenbauer, and Emily Havens; one great-great-granddaughter, Alyssa Webb and one great-great-grandson, Zaiden Jones and many nieces and nephews.

Murline was a homemaker and kept books for their business. She and her husband farmed near Holliday, MO. She recorded that they lived in thirteen locations, before retiring in Paris. Many moves involved work finding rock for the Hamilton Lime and Rock Crusher business. She enjoyed time with her family, visiting with friends, collecting antiques, attending antique car shows with her husband, traveling and giving generously to her community. For over twenty-five years she saved aluminum can tabs for the Ronald McDonald House in Columbia.  She continued that hobby while at the Manor and collected over 10 gallons. Plans are to continue the collection in her memory at the Manor. Murline was a faithful member of the Paris United Methodist Church and at the time of her death the oldest living member.

Funeral services will be at 2:00 p.m. on Monday at the Agnew Funeral Home in Paris, MO with Reverend Lin Donnelly officiating. Visitation will be from 12:00 until time of service on Monday. Burial will be in Walnut Grove Cemetery in Paris.