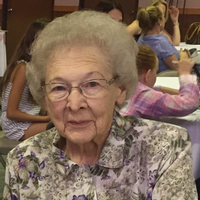 Mildred was born January 6, 1926 in Caldwell, Texas to Henry and Lillie Belle Struck Giesenschlag. She and her siblings, Margie and Wilton, grew up in the small town of Snook, Texas. Mildred attended elementary school at the Hrozanka Grammar School in Burleson County, then attended junior high and high school in Snook, Texas. She graduated from Snook High School at 16 years old. From there she attended Blinn College in Brenham, Texas and graduated in 1944. From there she went to Sam Houston State Teachers College and later told many amazing stories of attending school there during and after World War II. She graduated from Sam Houston with a Bachelor of Science in August of 1948. Mildred began her teaching career at Hempstead High school where she taught history, shorthand and typing, as well as coached volleyball and basketball. Shortly after moving to Hempstead, Major Winfree introduced Mildred to Hubert Barry, a local farmer and rancher. Mildred married Hubert on December 25th, 1948. Following their marriage, Mildred worked as the accountant for The Hempstead Watermelon Association to make extra money during the summers. Mildred and Hubert had two sons- Kelvin born in 1957, Hayden in 1961. They raised their boys hunting, fishing and farming. Together they started Hubert Barry Grain and Feed in the late 60’s. Later, they opened Barry Feed Store across town. Outside of work, Mildred enjoyed traveling, bowling, hunting, and study club. Later in life, after the passing of her husband, she became an avid reader, enjoyed playing chicken foot with friends and spending time with her family. She worked until she was 88 years old because she loved working and talking with people. Mildred loved talking and telling stories to family, friends, former students and old customers.

Special thanks to her friends and caregivers- Edith, Joe and Carli.

In lieu of flowers the family suggests donations be made to Waller County Library, 2331 11th St, Hempstead, TX 77445.