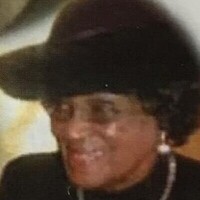 On the morning of Palm Sunday, April 5, 2020, at Doctors' Community Hospital in Lanham, Maryland God, in His infinite wisdom, called to eternal rest our beloved, Mary Anna Smaw Rogers.

Mary Anna was born to the late Merritt Joseph Smaw and Mildred Scott Smaw December 20, 1929 in Northampton County, Virginia.  She received her early education in the public schools of Northampton County.  Upon graduating high school, Mary Anna continued her education at Saint Paul's College, a private historically black college located in Lawrenceville, Virginia, where she received a Bachelor's of Early Childhood Education, specializing in Special Education.

Mary Anna accepted Christ at an early age, becoming a member of Ebenezer A.M.E. Church, where she remained a faithful and dutiful member for more than 75 years.  When she was a teenager, Mary Anna served as a member of the distinguished Daughters of Ebenezer.  She was also gifted with a lovely soft soprano voice and sang on the senior choir for more than 25 years.  Through her membership, Mary Anna worked diligently alongside her mother, Mildred, to sponsor countless church fundraisers, homecomings and special programs.  It was only when her health began to fail, relocating to be cared for by her children, that she was forced to leave her much-loved Ebenezer.

Mary Anna was always very enterprising.  Months prior to graduating from Saint Paul's, she secured employment at the Northampton County Public School System, where she taught both elementary and special education classes for 38 years and 11 months.  In 1985, in partnership with her eldest son, Louise, she opened Cheriton 76 Gas Station.  The following year she and her son, Merritt, founded Family Auto Sales of Cheriton, Virginia, which she and her family successfully operated for 23 years until she decided to retire.  Mary Anna was also affiliated with the Northampton and Accomack County Housing Authorities, where she provided rental housing for qualifying residents for more than 20 years.

Mary Anna had so many wonderful facets to her life and being.  She was dutiful daughter, niece and cousin; protective and doting mother; God-fearing, sweet, quiet and kind spirit.  However, when called to  task, she was a powerhouse, boss lady, a force to be reckoned with; taking charge of what needed to be done, no matter how challenging.  But above all, her family was her heart and she loved them truly and unconditionally.