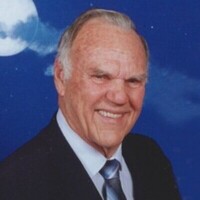 Loyd Douglas Woolever died peacefully at home with his family present. He was known by his family and friends as Doug and lived till he was 90 years old. He was born in San Luis Obispo, CA. to Everett L. Woolever and Edna E.Thompson and married Arlene Grace Wilson in Long Beach, CA  on August 4, 1956.

His family moved to Torrance, CA. when he was a little boy and Doug graduated from Torrance High School in 1948.

He joined the Air force in 1949 and headed to Korea as a Air Policeman.  He quickly rose to Sergeant and was on honor guard, prisoner transport, aircraft gunner, bomb disposal and other roles he didn't want to discuss.  His first marriage brought him a son David Brian Woolever in 1950 and he spent the remainder of his military service in the Korean War.

When he married his second wife Arlene and adopted Lee Douglas Woolever then had another son Timothy Darryl Woolever, February 21, 1966 in Long Beach, CA. He was actively involved in Boy Scouts as a child and a supportive father and Scout master with his boys and watched his son Tim attain Eagle Scout in the organization.

He worked in the aerospace industry for 30+ years with the Hound Dog, Apollo, Space Shuttle and B1 Bomber and ended up at VAFB in 1983, and retired in 1992.

He was a life long member of the Elks Lodge and enjoyed square dancing with his wife in his retirement years. He loved to go camping and took many camping trips with family throughout the years and spent a lot of time traveling around the United States with his wife.

He will forever be remembered by his sons David (Irma) Woolever from Raymondville, Texas and Tim (LeAnne) Woolever who live in Lompoc. Doug presently has 9 grandchildren, 11 great-grandchildren and a great-great granddaughter. Also several nieces, nephews, close family and friends who will also miss him. Do to covid 19 a private family service will take place at Evergreen Cemetery. In the future there will be a celebration of Life for him with family and friends.

To send a flower arrangement to the family of Loyd Douglas Woolever, please click here to visit our Sympathy Store.