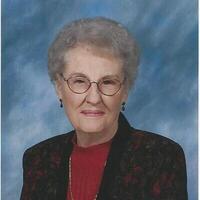 LaVonne Marie Beckman, 99, of Wessington Springs passed away Tuesday May 19, 2020 at the Avera Brady Health and Rehab in Mitchell. A private family service will be held at 2:00 PM Saturday May 30th at the United Methodist Church in Wessington Springs. Burial will be in Prospect Hill Cemetery.

LaVonne was born October 2, 1920 at the family farm Southwest of Wessington Springs to William and Mary (Welter) Klink.

She attended grade school at Viola Center and graduated from Wessington Springs High School in 1938. She was employed at the Soil Conservation Office, and later in the County Superintendent of Schools office from 1939 – 1942.

On January 1st, 1943, she was united in marriage to Alfred Beckman at the home of her parents. They farmed until 1947 when they moved into Wessington Springs.

LaVonne moved to Mitchell in October 2015 to live with her daughter, Sheila Pederson, who became her caregiver, until entering Avera Brady Health and Rehab in July 2019.

She was preceded in death by her husband on August 23, 2003, her parents, her sister Delores Kogel, brother-in-law John Kogel and sons-in-law Jerry Pederson and Dennis Etbauer.