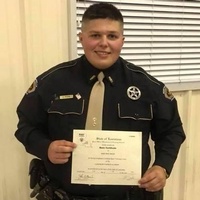 Kirt Roy Ricks III, age 24, of Winnfield, Louisiana passed away, on Friday, September 7, 2018 as the result of an accident in the line of duty.

Officer Ricks was a member of the First Baptist Church of Winnfield, Louisiana and was a recent graduate of Lafourche Police Academy.  He was Assistant Chief of Police of the Montgomery Police Department.  He enjoyed golfing but had a real passion for helping others and serving his community through law enforcement.  He was  jovial with everyone he met and will be remembered for his constant smile and dedication to those he served.

He is preceded in death by his father Kirt Roy Ricks Jr. as well as his paternal grandmother Dee Ann Emmons Ricks.

Friends may visit with the family at the funeral home on Thursday from 5:00 p.m. until 8:00 p.m. and also at the church on Friday from 9:00 a.m. until time of services.