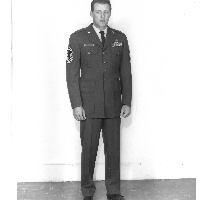 Kenneth Joseph Wycoff passed away early Monday morning, April 29, 2019, at the North West Louisiana War Veterans Home in Bossier City, LA.  He was 88 years old. He was born August 5, 1930, in Dallas, TX. He was the son of Frank E. Wycoff and Daisy Cavender Terry. He was proceeded in death by this wife of 66 years, Margaret E. Miller of Shreveport, and his youngest son, Wendell C. Wycoff, of Orlando, FL. He served in the U.S. Air Force from 1946 to 1975 and rose to the rank of Chief Master Sergeant and was nominated as the First Sergeant of the Air Force. He loved golfing, fishing, duck hunting and being in the outdoors. In the 1960’s he was a renowned fast pitch softball pitcher and was inducted into the softball hall of fame in 1989. He is survived by a daughter and son-in-law, Cheryl C. and Ralph Sterba of Elm Grove, LA; two sons and daughters-in-law, Chris and Caye Wycoff, of Salt Lake City, UT and Barry E and Angela Wycoff of Ft. Walton Beach, FL. He is also survived by two sisters and one brother-in-law, Winnie and Jerry Hinger, of Dallas, TX, Betty Hamilton, of Maud, TX, and brother, Marvin and wife Glenna Wycoff, of Dallas, TX; 9 grandchildren, and 15 great-grandchildren. He was a loving husband, father and grandfather and will be greatly missed.  The family would like to thank the employees and staff of the North West Louisiana War Veterans Home for their excellent care of our father.