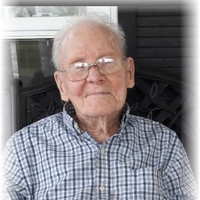 Justus Ira “Pete” Olney, 97, of Holliday, passed away peacefully with family by his side on Sunday, May 24, 2020 at the Monroe Manor nursing home in Paris. Pete was born on August 25, 1922 in Kansas City, Missouri. He was the son of George F. Olney and Naomi K. Howard Olney.

Pete was honorably discharged from the navy during WWII. In 1944, he went to work for his brother-in-law, Mac Donovan, at a garage, where he was the main mechanic and body-man.  Pete worked there full-time until he went to work as a mail carrier in August of 1956.

Pete was a rural mail carrier from 1956-1983. On the side, he was a born mechanic and great body-man. He restored many vintage cars and worked repairs for people from all over, and was still working on a motor in 2017 when his garage caught fire, resulting in the loss of his ‘41 Chevy and his beautiful home. Pete and Mert then moved to Miller’s assisted living for three years.

Pete and Mert spent nearly 30 years wintering in Weslaco, Texas, and took many trips all over the United States in their ’41 Chevy. His ’32 Ford was in two movies: O Brother, Where Art Thou? and Cinderella Man. Pete had many friends in the antique car club and retired mail carriers, and many other card-playing friends.