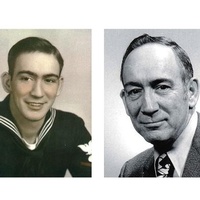 A dedicated public servant, always willing to share his century spanning life experiences with young or old, has now departed from his Earthly mission. Joseph (Joe) Richard Zeller came into this World on September 19, 1918 in the tiny town of Campus, Illinois, the son of Carl and Frances (Kunkel) Zeller. He departed on December 12, 2018 at the age of 100 in his favorite room of the house he proudly built near New Tripoli. He believed being positive would achieve personal goals and that every generation will meet their challenges to keep our Nation strong.

Joe came into the world during the last months of WWI and lived through the Spanish Flu which claimed his brother Leo. Joe’s youth was shaped by several factors: at age 11 his Mother died; his Father’s life as a tavern owner; dedication to the Catholic Church teachings; the family home and business being lost during the Depression and finally along with his younger brother Frank, coming under the custody of an Aunt in southern Indiana at the age of 15. His three years as a farm hand for his Aunt included operating her sizable illegal moonshine production which fueled the Chicago gangsters of the era, some of which he came in contact at his Dad’s tavern and included Al Capone. After Federal Agents raided his Aunt’s operation, these two teens fled to Chicago hidden in a load of furniture. With the Country still in the Depression, Joe took care of himself and his brother by working in restaurants and selling vacuum cleaners until he became an apprentice electrician in 1938 in Wausau, Wisconsin and a journeyman electrician in 1941. In Chicago, Joe also boxed in the Golden Gloves competition.

Being a journeyman electrician set the stage for over three years of WWII service, joining the Navy in the Great Lakes. He earned the rank of Aviation Electric Mate Chief, serving 2 years aboard the USS Ranger CV-4, the first carrier built from the keel up, with combat in Operation Torch in Africa as well as Operation Leader along the coast of Norway. He was recalled during the Korean War. Joe never saw the inside of a high school but through the GI Bill and night school for five years earned a degree in Electrical Engineering through Penn State.

After his Korean War service, Joe’s life call became assisting others as the organizer of the Emmaus Taxpayers League, the foundation for his service to the Borough of Emmaus as Councilman and Mayor. His concern for affordable senior citizen housing resulted in the founding and Presidency of the East Penn Non-Profit Housing Corporation. In 1970 Joe was elected to the first of five terms as a Member of the Pennsylvania House of Representatives from the 134th Legislative District where he dedicated himself to assisting our volunteer fire and ambulance services. He was also tapped to serve twelve years as a Council Member of the Governor’s Justice Commission and a decade on the Advisory Board of the Lehigh County Community College. Joe always cherished the “scissor” tie tack presented to him by late Morning Call Publisher Don Miller, symbolic of cutting the red tape in the State Legislature.

In addition to his public service, his career in Electrical Engineering was highlighted with more than 10 years with E.C. Ernst Electrical Contractors of Washington, D.C. supervising projects like Veterans Stadium in Philadelphia, the original Schaefer Brewery of Breinigsville and the Chesapeake Bay Bridge Project. Zeller held membership in the International Brotherhood of Electrical Workers (I.B.E.W. Local 375) since 1941. He also served as a Columnist for locals in the Lehigh Valley for more than two decades through his “Views to You” and Zeller’s Weekly Report.

Among numerous memberships, associations and community causes he was affiliated with, he touts more than 50 years as a Boy Scout Merit Badge Counselor; keeping the Soldiers and Sailors Monument rooted at Center Square during the 1960’s push to relocate it to West Park; successfully challenging his own Priest during an illegal bingo operation; defeating the State Civil Liberties Union’s drive to remove the taxpayer purchased Nativity Scene from the Emmaus municipal property; blocking the building of the Trexler Dam in Western Lehigh in the 1970’s; serving as a public speaker for over 45 years on government and community service. Assisting and honoring fellow Veterans was a priority and included the formation of the “Brig. Gen. Anna Mae V. McCabe Hays VFW Post 12099” in Allentown. In recent years his untiring energy was directed to the Seipstown Grange #1657; the Lehigh Valley Beekeepers Association; the Emmaus Historical Society with the Shelter House and 1803 House; his 20 year tenure as Treasurer of the USS Ranger CV-4 Reunion Group; the Zeller Family Reunion Group of Lebanon County where his beloved Ft. Zeller (1745) is located and serving as Chairman of their 300th Anniversary weekend of Zeller/s in America in 2010. He also “hands on” chaired the 100th anniversary celebrations of the Soldiers and Sailors Monument in 1999 and the Allentown Flag Day Association in 2007 as well as the 50th Anniversary of the Korean War in the Lehigh Valley where more than 1200 appreciation medallions were presented in behalf of the Nation of South Korea. His patriotism never wavered with more than 70 years membership in both the American Legion and the Veterans of Foreign Wars and Founder/President of the Emmaus Flag Day Association and Past President of the Allentown Flag Day Association. For decades Joe daily sported his signature patriotic flag tie noticed by all.

Survivors: Ann Wertman, his partner of more than 40 years always actively by his side in all causes. He is survived by three daughters; Brenda, Laura and Margaret and five grandchildren from his earlier marriage to Marjorie Lawless Zeller. His siblings Carl, John, Leo, Frank and Irene preceded him in death.

Services: Private services with burial at Fort Indiantown Gap National Ceremony where he wishes to join his comrades who proudly served their Nation. Arrangements by Keller Funeral Homes, Inc., Fogelsville. Online condolences may be offered to the family at www.KellerFuneralHomes.com.

Contributions: To VFW Post 12099 of Allentown to continue their service to fellow Veterans or to the historic Liberty Bell Museum of Allentown to keep local history alive, both in care of the Keller Funeral Home, Inc., PO Box 52, Fogelsville, 18051.