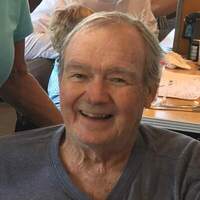 Jon Freed Wright died at his home on Saratoga Drive in Nashville TN on April 29th, 2020.

Jon was born to James and Glee Wright at Vanderbilt Hospital on September 1, 1943. He attended Inglewood Elementary and and Isaac Litton High school in Nashville before moving to San Diego with his family. He completed high school at Chula Vista High and went on to complete his B.A. at San Diego State.

Jon joined the US Navy in 1967 and was stationed in Viet Nam, Thailand, San Diego and San Francisco. It was during his time in San Francisco that he met and began dating Barbara Sue O’Connor. They married in Michigan on August 8th, 1970. In 1975 Jon and Barbara returned to Nashville where they became members of Hillsboro Presbyterian Church, where he served as an elder.

Jon was an avid Porsche enthusiast, with an ever growing collection of cars, parts and memorabilia. He was a member of the Porsche Club of America and the Tennessee Tubs Porsche Enthusiasts Club. After retiring from a career in marketing and sales he and Barbara were able to travel widely, with a particular fondness for the island of Maui.

The family will not be holding services immediately, due to the current environment. They plan to hold a celebration of life event in 2021.

A Tribute from Jon Davis Wright:

When I was 19 years old my toyota minivan died on the way home from college. I left the van on the side of the highway, hitched a ride to the next exit, and I did the thing that I do in those situations: I called my dad.

I was in a small town named Tipp City, north of Dayton, OH, so not-so-very far on the road from Ann Arbor to Nashville. I made it to a payphone and I gave dad the scoop. He had questions for me which I was ill-suited to answer. My ability to diagnose automotive issues was very binary: the van was either working, or - as in my case - broken.

So dad hooked up a trailer to his little white Toyota truck and headed north to bail me out. Because that is what my dad did. From the moment my van lost power and I coaxed it to the side of the road I knew that I would call dad and he would fix the problem. Looking back on this moment, that is the thing that stands out to me. Even 450 miles away on the side of the road I never worried, because I knew my dad would fix the problem.

My dad took care of business. He would start his day with a yellow stenopad notebook, the date at the top of the page, his to-do list written in clear block handwriting. He would work his way through the list, crossing out tasks as they were completed. If I had something that needed to be fixed, tweaked, replaced, maintained, I got it on the list and dad knocked it out.

My dad loved events and making things happen. He relished the planning of a backyard barbecue, of TN Tubs Porsche event, of a family Christmas. He exerted the gentle peer pressure to make sure that you showed up. And you were always glad that you did.

My dad was a hub. He kept in touch with people and brought them together. In this way - maybe more than anything - I am like my father. He taught me, by example, to maintain connections and to check in and to be a friend.

My dad loved rock and roll. My formative years were spent listening to 103 KDF on the drive in to school. The foundation of my record collection was vinyl bootlegs he had purchased in Thailand and Viet Nam. All Things Must Pass by George Harrison and Joe Cocker's Mad Dogs and Englishmen. Cream’s Disraeli Gears and Sticky Finger’s by the Stones.… knock-off vinyl in thin plastic sleeves. Great music. The first song I ever learned on guitar was CCR’s Have You Ever Seen the Rain?. John Fogerty always makes me think of my dad, in the garage, singing along to “Keep on Chooglin’.”

My dad was a native Nashvillian with a variable southern accent that deepened depending on his audience. Funny story: One summer we had a guys’ trip to cousin Jim’s cabin in Canada. Driving across northern Minnesota, my dad at the wheel, we got pulled over by a MN State Trooper. For my father, raised in the south, interacting with a State Trooper along an empty stretch of highway meant pulling out his deepest bubba-variant of southern drawl. Of course, this tried-and-true strategy - so successful in Alabama and Tennessee - failed miserably in northern Minnesota. Dad got a steep ticket.

My dad was a fan. At my countless soccer games his voice from the sidelines was always the loudest. I remember the feeling of him cheering for me, mildly embarrassing and totally wonderful.

My dad was someone you could count on. Unfailingly. Never ever in my entire life was there a question that my dad would be there for me. To do whatever was needed. I am so thankful for that. My life was shaped by this surety. I have been free to explore and experiment and stretch my neck out because I have always known that there was that safety net below me.

My father, Jon Freed Wright, passed away in the morning of April 29th, 2020. For those of you that knew him, I hope that you will take a moment to raise a glass to his memory. I hope it makes you smile. Maybe when we get on the other side of this current crisis you can share your story with me, with my family, with my dad’s many, many other friends.  Jon Davis Wright | April 30th, 2020

My dad is a collector of things. Cars mostly, and Porsche’s if you want to get specific, but he ventured into vintage Volvo’s and Volkswagons and Chevy’s as well.  For everyday driving he was a Toyota guy. Nissan’s were also high on the list and recently Hyundai was brought into the family with enthusiasm. Now i won’t pretend to understand much about cars but I do know one thing for certain and let’s go ahead and get this straight right off the bat--it’s pronounced poor-shah, not poorsch. I will never forget the day he let me drive his 1982 Porsche 911 SC in high school. We went out towards Ashland City and he let me let her rip on Briley Parkway. My whole body shook from the power of that car. He was smiling behind his Ray-Ban’s and exercised a patience with me figuring out that clutch that day I will always remember. There is something about the bond of a father and his daughter.

In 2012 I bought my first car “on my own”. I wanted a Toyota Prius and did a fair amount of research for the specifics. I went in on a Saturday after months of looking at available options in Nashville, Cookeville, Huntsville, and Murfreesboro in hopes of taking a test drive. I wasn’t planning on buying the car that day, but that’s not how it went down. Several hours later I sat in a cubicle with a salesman named Chris ping-ponging upgrades and haggling prices. I was hungry, over caffeinated, and ready to go home. But I was also determined. I had done my research and knew the stats of many available options at different dealerships. I stayed firm. Everytime Chris would give me his “final” price he would get up and leave me alone to ponder, and that’s when I would call my dad with clammy hands, relaying as much info as I could and await my next move. I think we gave Chris a pretty good run for his money that Saturday, me and my dad. I had done my homework, just like I’d been taught, and I came out victorious. I found out some time later that dad had called Chris that week to thank him for his help with me and they stayed in touch for quite some time after that.

You see, my dad was a collector of people too. My dad “had a guy for that”. Whether you needed help in the yard, a new appliance, an insurance agent, servicing for your car, etc. he would steer you in the right direction, reaching for his overflowing address book filled with business cards, and alphabetized friends, coworkers, and service providers. He had friends from church, from San Francisco where he and my mother met, from Porsche clubs that he belonged to, and it brought him great joy to have a reason to bring all his people together. I get that from my father. The more the merrier has always been our way. He has maintained friendships with the same crew that I have known my whole life and collected many more along the way. I had to have many gentle conversations with him when we were planning our Nashville wedding party that no, the entire Tennessee Tubs Porsche Club could unfortunately not be invited to come. I married a “collector of things” and it occurs to me now that perhaps this is one of the many reasons my father liked my husband so much. They understood each other. It doesn’t matter if you actually drive the car, or wear the sneakers. It’s about the pursuit of the hunt. The tinkering of the parts, the changing of the laces. The preservation of a good find.

I will miss my dad every time I hear CCR or The Rolling Stones on the radio. Everytime I see a James Bond Movie, or Romancing The Stone or Jewel of the Nile on TV. I will miss him at Christmas when, year after year, he never tired of “Oh Fragile--must be Italian” blasting from the living room on a 24 hour A Christmas Story marathon on TBS. I will miss hearing him say “Get back Loretta!”, and “The thing about it is”, and ‘It’s pure unadulterated..” when he wants to describe something he really, really loves. I will miss him being sarcastic and overbearing with my friends. The more he liked them, the more they got. I will miss seeing the joy he got from being Molly and Connor’s Pop Pops. I will miss all the emails he would send me when I would keep in touch on my travels, always relating a story of his own to whatever I was doing at the time. And I will miss all the lessons he taught me anytime I was working through a challenge.

I lost my dad early in the morning on Wednesday April 29, 2020. So much of the person I am is because of my father-stubborn, loyal, determined, always there for a friend. He loved my family and his friends and he made that clear all of the time. I feel lucky to have been his daughter, and I know there are many people who feel lucky to have had him be a part of their life as well. I hope we get to celebrate his great big life soon. Shannon Glee Wright (Melidis)