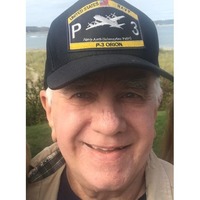 He was born and raised in Hyde Park, MA and was the son of the late John P. and Marjorie F. (Driscoll) Sebetes.

John attended Hyde Park High School; his trade focus was in machine shop. After school he followed in the footsteps of his uncle and enlisted in the United States Navy during the Vietnam War. He proudly served his country for 22 years and retired from the Navy in August 1988 on the U.S.S. Constitution as a Chief Petty Officer.

John later worked as a driver and concierge at River Woods in Exeter, NH and as a driver for Westford MA Public School. John excelled at and enjoyed both jobs because he was able to keep a watchful eye, lend an ear and look after those he was entrusted to transport and care for.

John was a true “foodie” and loved visiting the best New England restaurants – somewhat of a ‘Phantom Gourmet’ in his own right. He was also a collector; he especially liked classic cars and enjoyed hunting for antiques and collectables.

When John wasn’t out looking for the next best restaurant or deal, he enjoyed spending time with his family and watching sports. He was a loyal fan of all Boston teams and regularly cheered on his own children and grandchildren at their local sporting events over the years.

He often played board games with his family; cribbage and acey-ducey being firm favorites from his Navy days. A true family man, he’d always find days out that he and his loved ones could enjoy together (often the free type with a folding chair in tow).  John was a rollercoaster enthusiast and enjoyed visiting theme parks to find the best thrill rides. He also had a deep affection for birds and made feeding them one of his main hobbies which his many grandchildren took particular delight in.

John liked travelling with his lovely wife to Aruba, Florida and all across New England; they were especially fond of The White Mountains and the beaches. He enjoyed visiting with his daughters in England and managed to see Ireland and Scotland too.

He was extremely proud of his service to his country and on the 4th of July would seek the best fireworks display he could find or provide displays in his back yard during family gatherings.

Due to the complications with Coronavirus, keeping John’s loved ones apart, a funeral Mass will be held at a later date.