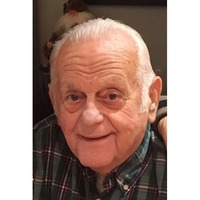 John F. Puliafico, a resident of Reading, formerly of Somerville entered into eternal life on Saturday, May 16, 2020 at the Winchester Hospital. He was 86 years of age.

John was born in Dedham on April 4, 1934, a son of the late Antonio and Elizabeth (Donahue) Puliafico. He grew up in Waltham and graduated from Waltham High School. John entered into the United States Army on February 15, 1955 and served his country with pride and honor. He also spent time in the Army Reserves and was honorably discharged in February, 1963. John joined the United States Postal Service and retired in 1993, after serving his Somerville community. Never wanting to remain still, John always had two jobs. Over the years, he worked at the Lawrence Memorial Hospital, drove a taxi, was a bartender and even served as a crossing guard for the Somerville Public Schools; retiring when he was 82 years of age. John was also a member of the James A. Logan Post VFW and was involved in planning many of their events. For the last three years, John lived at the Residences at Pearl Street where he made new friends and actively participated in all of the daily activities. John loved cooking for social gatherings, he cherished time with his family and he enjoyed cheering on the Boston sports teams.

John was the beloved husband of the late Mary Ellen (Pinkham) Puliafico. He was the devoted father of Jean Marie Halley and her husband Steven of Reading, and the late John F, Puliafico, Jr; Stepfather of Kevin Murphy and the late William Murphy. He was the loving Papa to Adam, Justin and Cate Halley; Shannon, Rachel and Caitlyn Murphy. John was the cherished brother of the late Philip Puliafico and Mary Caira. John is also survived by many loving in-laws, nieces and nephews. He will be greatly missed.

Due to the Pandemic, John’s Funeral Services at Charles Lawn Cemetery will be private, a memorial celebration will be held at a later date.

In lieu of flowers, donations may be made in John’s memory to the Resident Engagement Program C/O The Residences at Pearl Street 75 Pearl St. Reading, MA 01867.