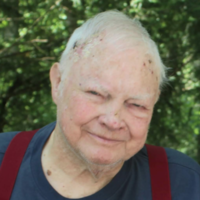 Jimmy Ray Cisson, 86, passed away peacefully in his home on Thursday, April 23 after his recent health decline. His daughter Carol and granddaughter Carly were right next to him as he took his last breath.

He is preceded in death by his wife, Doris (Reeves) Cisson in 2001. He is survived by his sons: Danny Cisson, Donald Cisson (Julie), and his daughter Carol Cisson-Mullins (Earl). He leaves behind his only grandchild, his beloved granddaughter Carly Cisson. He also is survived by his younger brother, Milton Earl Cisson and his wife Donna Cisson of Simpsonville, South Carolina. Additionally, Jimmy has left behind numerous other relatives and close friends.

Born and raised in Greenville, South Carolina, the son of William Paul Cisson and Jennie Mae Byrd, Jimmy was involved in various facets of his community.

In his early years, Jimmy lived with his grandparents and maintained two routes as a local paper boy. He played baseball while growing up and as a teenager, played and managed a local mill village baseball team. He graduated from Parker High School in Greenville, S.C in 1952. There he met his wife, Doris, after first popping her from behind with a gnarly spitball (his exact words). Shortly after, they decided to go steady and after Jimmy’s graduation, they got married on Christmas in 1952.

In 1952, Jimmy entered the U.S Navy Reserves and then actively served overseas in the Navy as an electronic technician from 1957-1959 (ETR2). Eventually, he made his way to working for the Federal Aviation Administration (FAA) and retired in 1994, after nearly 27 years of service.

In his adult life, Jimmy served as a mentor and pillar in his local sports communities. He was a baseball umpire and coached the San Mateo Little League and served as its president. He also refereed high school football in the Ft.Walton Beach and Jacksonville communities for 20+ years. Jimmy had a passion for traveling, having visited all fifty states and beyond fifty countries around the world. Also, an avid golfer, Jimmy enjoyed playing alongside his sons, coworkers, and especially his friends, which Jimmy did not lack. His sarcasm, wit, cleverness accompanied by his generosity and fervor for life allowed him to easily make a multitude of friends throughout his life.

He will be thoroughly missed by all those who knew and loved him. He lived a long, fulfilling life and leaves a grand legacy, to be remembered as much more than a good man.

Jimmy will be cremated and a celebration of life is tentatively scheduled in August. More details will be released closer to the date. This will be a time for all of Jimmy’s family and friends to come celebrate the incredible life he lived. His family especially looks forward to commemorating his life with those who had the blessing of knowing and loving him.