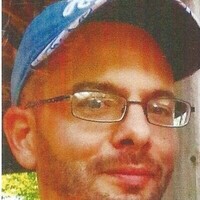 Jeremy Travis Robertson, born 2 May 1981, died unexpectedly of unknown causes on 21 March 2020. He was born, raised, and educated in Nashville, Tennessee, and with a couple of short exceptions, lived his entire life there. He earned a certificate as an HVAC technician and worked numerous jobs during his lifetime.

J.T. enjoyed playing chess and games of strategy, on-line interactive video games, and never failed to attend the annual renaissance festival. Like his mother, he could be very generous and helpful toward those in need. A rather solitary individual, he had a small circle of friends, and could be fiercely and unforgivingly protective of those friends and his family.

Taken all in all, he was a good son.

J.T. Robertson is preceded in death by his mother, Susan Gail (Boysen) Robertson. He never married, but had one daughter, Ryleigh Ray. He also is survived by his father and his two sisters, Lilleeann (Kitty) Highsmith of Bowling Green, Kentucky, and Courtney Beckworth, of LaVergne, Tennessee.

Plans for a memorial service are still pending.