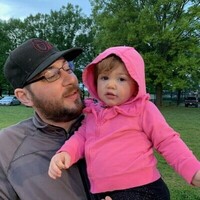 Jason F. Heath, loving and devoted father of Elizabeth Grace-Marie Heath, and son of Joanne M. and William F. “Fred” Heath, Jr. of Severna Park, passed away on May 11th in Galena, MD.  He also leaves behind his partner, Kristin McCarthy of Massey, MD, a brother, Christopher Heath of Glen Burnie, an uncle, Jerrold Heath of Severna Park, and Grandfather, Norman Pandell of Cheshire, MA.  There are also many aunts, uncles and cousins in western Massachusetts and southern California.  Predeceasing him were this grandparents, Anna and William F. Heath, Sr. of Arnold, MD and grandmother, Joyce M. Pandell of Cheshire, MA.

Jason attended Anne Arundel County Public Schools and graduated from Chesapeake HS in 2001.  After graduation, he attended The Sheffield Institute for the Recording Arts, completing the Audioworks Program.  He worked for several years at the Guitar Center in Glen Burnie, managing the pro-audio and lighting departments, and earned the James Brown Award for being the “Hardest Working Man” in the store.  He also worked part-time as the “technical wizard” for Tommy Gatz Entertainment in Annapolis.  Audio recording and editing was his passion.

In recent years, he applied his technical skills to the boating industry, working as a Marine Technician at Cypress Creek Marine in Severna Park, and most recently at Sassafras Harbor Marina in Georgetown, MD.  Two years ago he finally acquired his own sailboat and was learning the art of sailing.

Jason grew up in the Pasadena/Severna Park area and was a member of Pasadena United Methodist Church where he was an acolyte, member of the UMYF, and member of Cub Scout Pack and Boy Scout Troop 346 and Troop 1785.  He relocated to Massey, MD 3 years ago, and within the last month, moved to Galena.

In Addition to music and sailing, he also enjoyed keeping tropical fish, playing video games, and was a huge Orioles fan.  But most of all, he loved being a Dad!

A Celebration of his Life will be held at a later date at Pasadena United Methodist Church, 61 Ritchie Highway, Pasadena, MD.

In lieu of flowers, donations can be made to a fund for Elizabeth’s education, details to be determined.