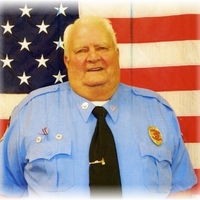 Gordon was raised in New Lenox, IL and attended Joliet Twsp. High School, where he was a member of their award-winning band as a drummer.  The band was selected to march in Dwight Eisenhower’s

Inaugural Parade in Washington, D.C., which was the first one to be televised.  Gordon attended the University of Illinois and then enlisted in the U. S. Air Force where he served for twenty years, seeing duty in several bases in the U. S. and in Germany, Alaska, and Thailand.  Upon retiring from the Air Force, he did some factory work and was an over the road truck driver.  He was a Madison, MO police officer for several years, and became involved in the Madison Fire Department, where he was a member until his death.  He enjoyed working with the Missouri State Fair Fire Department as a cook for several years.

Gordon enjoyed being outdoors hunting and fishing and was able to do both in several areas of the country.

Graveside services will be held on Friday at 11:00 a.m. at Missouri Veteran’s Cemetery at Jacksonville, MO.

Memorials may be made to the Madison Fire Department.

Agnew Funeral Home was in charge of the arrangements.