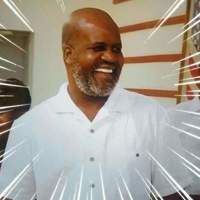 Glenville Othniel Cookson Sr was born in Kingston, Jamaica on May 13, 1963 to the parentage of Aston and Viouda Cookson. He was raised in Copse, Hanover, Jamaica.

Glen, Uncle Glen, Deacon Cookson as he was affectionately called was the fourth of six children. As a child, Glen was very humble, quiet, and kept mostly to himself. Although he was a child of few words, he was very wise.

In 1981, he graduated from Cornwall College High School in Jamaica before migrating to the United States in 1983, residing in Tampa, Florida. He attended Hillsborough Community College and The University of Tampa where he earned his B.S.C in Accounting. Glen worked for several different companies, including J.P Morgan Chase Bank where he worked for 22 years as a Manager and Supervisor in the Accounting Department.
Glen’s spiritual journey began in August of 1995 when he was baptized at Bethel Faith Temple in Spring Hill, Florida, by the late Pastor Floyd and Pastor K.C Griffin. In November of the same year,1995, he married his wife Beverly. In 1998, Glen was ordained as Deacon by Pastor K.C Griffin at Bethel Faith Temple.

In June of 2000, Glen and his family went to be with Pastor K.C Griffin at Bethel New Covenant Ministries. He faithfully fulfilled his role as a Deacon for over 20 years under the leadership of Pastor K.C Griffin and Dr. Levi Webb, and was recently ordained as a Pastor.
A man full of wisdom, he would often say, “think carefully before you open your mouth” and “by their fruit you shall know them”. He was a firm believer in righteous living and esteemed the value of a higher education. Glen was preceded in death by his father, Aston Cookson and daughter, Teresa (Nicole).

Glen left behind his wife, Beverly; children, Nicardo and daughter in law, Sophia, Glenville Jr, Jonathan and Amyla “Marshanna”, the daughter of his heart. He had three grandchildren, Aleah, Joshua and Amora; mother, Viouda Cookson;  siblings, Denton, Dowaga, Alphonso, Jennifer, Andrew  and other relatives and friends. He was a beloved husband, father, son, brother, uncle and friend. He has left us now, but we do not grieve as those without hope. Soon we shall be reunited, and heaven will bear witness to our joy.