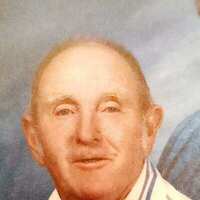 George Calvin Crigler passed away on August 25th, 2020 at the Missouri Veterans Home in Mexico, MO.

George Calvin Crigler was born on Feb. 25, 1927 in rural Monroe County, near Strother MO to Willie and Catherine Hanna Crigler. George grew up near Strother and attended the school there until the 8th grade. George worked for several farmers, including D.C. Vaughn. He also worked for Ulmer Wilkerson where he honed his mechanic skills. He was inducted into the Army in 1950 and served the United States in the Korean War for two years. He earned the Korean Service Medal with a Bronze Service Star and a Army Occupation Medal with an Overseas Bar – Combat Infantry Badge. George earned a living as a mechanic working at J.R. White Ford Co, Mason’s Garage, Monroe City Ford and the Chevrolet garage in Paris. In later years George worked for himself at his garage on the farm on Route U. His passion became working on and restoring old tractors. He could fix just about anything and could make just about anything out of nothing. George was a great guitar player and played in some bands in his earlier years and accompanied friends in fiddle contest.

George was preceded in death by his parents, and siblings; Ralph Crigler, Ray Crigler, Lloyd Crigler and Mary Wells.

George and Betty went on many trips touring the United States for many years in a pop-up camper. They also loved square dancing, going to auctions, Monroe Co Saddle Club, and Case Club. He was also a member of VFW Post 488 in Perry. The Crigler’s hosted an annual fish fry at their farm for many years which drew a big crowd for great food and a jam session afterward. George and Betty enjoyed their close neighbors on Route U, where they celebrated many birthdays. He also looked forward to going to coffee at Jonsey’s almost every morning where he would meet with his friends to catch up on the news (gossip). Most will remember George for his easy going personality, his wit and his never ending supply of jokes. George is a member of the Paris Presbyterian Church and more recently attended the Florida Presbyterian Church.

Memorials can be made in memory of George Crigler to the Missouri Veterans Home in Mexico.

To send a flower arrangement to the family of George Calvin Crigler, please click here to visit our Sympathy Store.