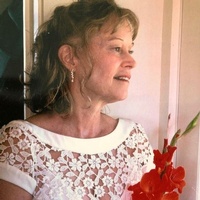 Gail Bourne was born on December 8th, 1952 in Denver, Colorado to Raymond and Sarah Parker. She graduated from Colorado State University in 1975.

After graduating, Gail traveled back east and worked in several resort restaurants including Bretton Woods. She arrived in Stowe in 1977 where she worked at The Fox Fire and The Shed before going into the gift shop business.

She ran The Art of Giving on Main Street in Stowe from 1982-86. In 1989, she started Wheel House Designs, including the Wildlife Gift Stop on Main Street in Stowe. The business started with a signature spotted cow sock and grew to over $2 million in revenue per year. In 2009, she received the Microenterprise Success of the Year from the U.S. Small Business Administration. Her business employed 8-10 people and had a yearly sock sale where people would travel from all over the northeast to visit and buy her socks.

Gail was a skiing, hockey, soccer, & basketball mom who somehow managed to make homemade sports cards, help with Cub Scouts, and take incredible family vacations while running her business. She would spend summers with her sons at the Commodores Inn swimming pool and would often be a gracious host during dinner parties and community events. She worked as a Stowe Host at the mountain and was a staple in organizing and running Stowe’s Winter Carnival.

Gail also had a fighting spirit. She was diagnosed with colon cancer in 2009 and it metastasized 3 years later. Typically diagnoses live 2-3 years. Gail lived an additional 7.

Funeral services will be held Saturday, February 2 at 10:30 a.m. at The Stowe Community Church with a reception to follow at the Green Mountain Inn.

Faith Funeral Home is assisting with arrangements. Online condolences may be made by visiting faithfh.net.

The family wishes to extend their gratitude to Karen G & Lamoille Home Health & Hospice, Carol Lauber, Charles Cooley and the friends and family who provided meals and support. Doctor Stephen Ades and his significant lady, Janet Ely at UVM oncology who for 10 years treated, supported, and cared for Gail and Roxi, keeper of the treatment schedule.

To send a flower arrangement or to plant trees in memory of Gail Bourne, please click here to visit our Sympathy Store.