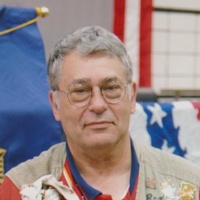 Frederic J. Berns was born July 10, 1945 at the Great Lakes Naval Station. Fred died in Whitehall, WI on October 25, 2017. Fred grew up working on the family farm. He graduated from the University of Illinois Law School in 1972 and joined the law firm of Tarrant, Mattka, Berns and Robertson in Whitehall, WI in 1973. Fred spent the next 44 years as an attorney in Whitehall, WI where he was a tireless advocate for small business, farms and the community. Fred frequently served as guardian ad litem to protect minor children and vulnerable adults in family matters. He was an integral part of the Tri-County Bar Association. Fred was a man with a big heart who quietly gave much of himself to his community and to his family in a humble, unassuming and often witty way.

He was active in the American Legion at the local and state level, honoring his father and uncles who served in World War II and his brother who served in Vietnam.  Fred was honorably discharged as a Captain at the end of his own military service.

Fred served for 20 years on the Badger Boy’s State Executive Council and two years as the Badger Boy’s State Executive Director. He was a Court Commissioner for Trempealeau County for over 30 years and also conducted Teen Court Training for many years. Fred helped to organize and run County Youth and Government Days for the Trempealeau County American Legion. He also served on the Whitehall School Board from 1974 through 1988 with a break in between terms. He was a long term Big Brother volunteer, regularly judged young writers’ poetry competitions and supervised individuals needing to work off their community service hours by having them help with Beef and Dairy Days.

Fred’s colleagues and family wish to recognize Sherry Brasda who has served as Fred’s paralegal for 31 years with loyalty, humor and consummate professionalism.

Fred was a charter member of Chevalrie du Fourquet, a professional beer drinking club, which is known for the club motto “Do not trust any beer you can see through.” He enthusiastically led many school and extended family trips to Europe to introduce others to the joys of international travel, culture and communication.

Fred has left a lasting legacy in the community with his commitment and passion to protect the vulnerable and train the leaders of tomorrow. He also leaves behind a treasure trove of original poetry, photography, stained glass art and tulips that will continue to bloom.

Funeral services will be held on Monday, October 30, 2017 at 11:00 a.m. in the First Baptist Church with burial in the Lincoln Cemetery both in Whitehall. Military graveside rites will be conducted by the Hutchins-Stendahl American Legion Post #191.

Visitation will be Sunday, October 29, 2017 from 2-5 p.m. in the Jack Funeral Home in Whitehall and also one hour prior to the service at the church on Monday.

Memorials may be designated to Badger Boys State or the American Legion.