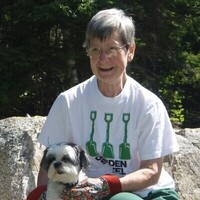 Eleanor (Walls) Brown, loving wife and mother, passed away peacefully at the age of 90 on May 10, 2020, in Severna Park, Maryland.

In 1951 she married Eugene “Gene” Brown who was in the U.S. Navy, and they spent many of their early married years living in Puerto Rico, the Philippine Islands and Okinawa.  Afterwards they settled in Glen Burnie, Maryland, and raised their two sons.  Later in life they lived in State College, Pennsylvania, and Millersville, Maryland.  Throughout the years they enjoyed spending time with immediate and extended family at their cabin on a lake in Mt. Desert Island, Maine.  Eleanor and Gene were happily married for over 55 years until Gene’s passing in 2007.

Eleanor’s activities reflected her kind and caring nature. She served as a school crossing guard in Millersville, and a sales clerk in the Needle and Thread Shop fabric store in Ferndale, Maryland.  She also volunteered for Pets on Wheels by taking her beloved dogs Annie and Lucy to various nursing homes and assisted living facilities to bring joy into the lives of the residents.  Eleanor loved to bake.  Her specialty was deserts, and she began a family tradition of baking holiday gingerbread cookies together, and on some of these occasions there were four generations of family participating.  That tradition continues.  She enjoyed creating crafts of many types, including ceramics, knitting, and needlepoint, but her favorite craft activity was sewing: Eleanor was an avid seamstress and loved sewing for herself and others, and regularly helped neighbors with sewing and advice.  She enjoyed dancing, having danced frequently in her youth, but those skills never left her as throughout the years, whenever she and her brother were at a wedding together, they showed they could still cut a mean rug dancing the jitterbug.

Eleanor’s family would like to express a special thanks to the kind and helpful staff at Sunrise of Severna Park and Hospice of the Chesapeake.

The family will celebrate Eleanor’s life well lived at a future date.

In lieu of flowers, contributions in Eleanor’s memory may be made to: