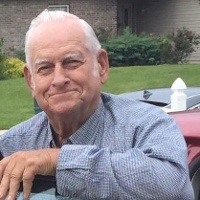 He was born on September 21, 1934 to Robert Edwin and Lillie Mae Graham Black in Mount Ayr in Ringgold County, Iowa. Doyle attended Frog Valley School in Iowa; and his family moved to Madison in 1950. He married Barbara Pollard, his wife of 48 years, on March 26, 1971 in Moberly and she survives at home. Other survivors include two daughters, Linda Barron of Cairo and Kimberly (Corey) Robinson of Columbia; three granddaughters, Tanya (Bronson) Kribbs of Cairo, Briahna and Laila Black of Columbia; three great-grandchildren, Logan and Rylee Kribbs of Cairo and Christopher Holloway of Columbia; one sister, Marge Cupp of Springfield, IL and many nieces and nephews. Doyle was proceded in death by his parents, Robert and Lillie Black; one son, Stephan Black; one granddaughter, Crystal Holloway Price; two brothers, Harold and Bill Black; one sister, Velma Randolph and two brothers-in-law, Herman Randolph and Donald Cupp.

Doyle retired from Toastmaster after 44 years of service and, also, raised cattle on his farm in Madison. He was a Free Mason, and a member of the Old Milton Masonic Lodge #151.

He loved being surrounded by his family. Doyle enjoyed going for rides in the country, people watching and having coffee with the “boys”. If you knew Doyle, you knew he was a prankster and loved to joke and tell tall tales.

Masonic and funeral services will be held on Thursday at 6:00 p.m. at the Madison Area Community Center with Reverend Larry Thomas and Reverend Todd Walls officiating. Visitation will be from 4:00 p.m. until time of service on Thursday at the community center.

Agnew Funeral Home is in charge of the arrangements.

Memorials may be made to the Madison Area Community Center or Monroe County Cancer Supporters.