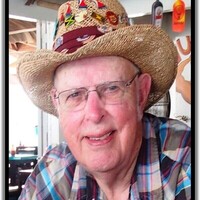 Donald Watt, 87, of Port Arthur, died Saturday, September 5, 2020 surrounded by his family. He was born in Philadelphia, PA to Margaret Watson Watt and Samuel Watt. He served four years in the U.S. Navy. While stationed in Orange, TX, he met and later married Iona McGuire.

Don and Iona lived in Nederland, TX and raised four children. He retired from Texaco in 1992 and relocated to Lake Amanda in Colmesneil, TX.

A visitation will be held on Thursday, September 10, 2020 at 9:00 AM in Woodville, TX at Our Lady of the Pines Catholic Church with the Funeral Mass at 10 AM. Burial will follow at Colmesneil Cemetery. Officiating will be Father Michael Strother. Serving as pallbearers will be Mike McGuire, Lee Philpott, Richard Philpott, Levi Hayes, Tyler Cox, and Ty Philpott. Honorary pallbearers are Tyler Fletcher and Ashton Martin.

Services are under the direction of Stringer & Griffin Funeral Home in Woodville, Texas.