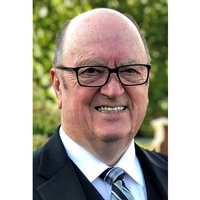 Art O’Dell began celebrating in heaven on March 15, 2019 while his immediate family was gathered near him. He was born October 4, 1941 to B. Isabelle (Hendrick) and Mark O’Dell in Cass City, Michigan. He was named Dennis Arthur, but was known to everyone as simply “Art”.

He married Ann Lynn Mills on July 20, 1962. They were blessed with two children, Stephen Arthur (Anne Paine) of Roanoke, VA and Sharon “Sharie” Lynn (Mark Schnell) of Marion, IN. He graduated from Owosso College in 1963. He was ordained by the West Michigan District of the Wesleyan Church. He earned a Master of Arts in Ministry from Indiana Wesleyan University in 1987. He did graduate studies at Trinity Evangelical Seminary, completing a Doctor of Ministry in 1995.

His passion for introducing people to Jesus and discipling them began in high school. He formed a Gospel team and began preaching in area churches. In 1961/62 he served as director of Blue Water Youth for Christ. His first pastorate was in Ashley, Michigan. He served 33 years as a local church pastor in Waldron, Lansing, Sturgis, Battle Creek, MI, and New Berlin, WI. Following those years, he served in international ministries under YFC, Emerging Young Leaders, and as pastor to missionaries with Global Partners of the Wesleyan Church. These ministries took him to more than 40 countries of the world. In retirement he enjoyed serving as an adjunct professor at Indiana Wesleyan University and Wesley Seminary. He was actively involved at Fairview Mennonite Church. People often referred to him as a modern-day Barnabas because he was a great encourager.

He was an avid reader and enjoyed woodworking. During the last months of his illness he longed to get back into his shop.

Two brothers, David and Lester, preceded him in death. He is survived by his brother Grant of Waddy, KY, and five grandchildren: Tyler (Karen) of Big Rapids, Spencer (Shannon) of Kalamazoo, Trevor (Ally) of Marion, IN and Kathryn and Charles James (CJ) Schnell of Marion, IN.

Donation may be made to: The Fairview Mennonite Church for  "Emerging Youth Leaders, Bangladesh" for ministerial training. PO Box 100, Fairview, MI 48621.