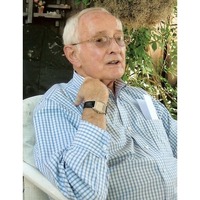 David Ellsworth Jenkins, Jr., MD, 88, passed away at his home in Hummelstown, Pennsylvania surrounded by his family. Born in Niles, Ohio on June 3, 1932, he was the son of the late Edna and David E. Jenkins.  David graduated from Niles McKinley High School, class of 1949, before attending Yale University where he received his AB in psychology in 1954. He earned his MD from Western Reserve University School of Medicine in Cleveland, and then completed his postgraduate training in internal medicine at New York Hospital, Cornell Medical Center, New York City, in 1963.

David moved with his family to Nashville where he taught and pursued his research interests in hematology at both Vanderbilt Medical School and the VA Hospital.  He was then recruited by the Penn State Milton S. Hershey Medical Center as a Professor of Medicine and Chief of Hematology where he worked closely with other founders to coordinate clinical teaching programs and to develop the Department of Medicine.  In 1973, David returned to Vanderbilt to pursue his research in hemolytic anemias and red cell interactions.  He became the medical director of the Red Cross in Nashville and accepted an academic medical appointment at Vanderbilt.  David often referred to himself as an itinerant hematologist: over the years, he held influential positions at the Central Blood Bank of Pittsburgh, the University of California School of Medicine and the University of Louisville School of Medicine.

In 2002, David semi-retired, and he and his wife Gillian returned to Hershey to enjoy his many friends and acquaintances in the area.  The move allowed him to return to teaching the second-year hematology course that he and Dr. Elaine Eyster had developed. David also collaborated with Dr. Max Lang and Dr. John Waldhausen to write Founders, a book detailing the vision and goals of the Medical Center’s founding leaders.

David loved music of all kinds and played the ukulele and banjo by ear.  Later, with the help of Gillian, he learned to appreciate opera and the symphony. He was a lifelong lover of all sports, participating in high school and college athletics and then becoming a patient and enthusiastic coach to his own children, grandchildren, and their many friends. David never met a number he didn’t love — he never forgot a birthday, a telephone number, a batting average, or the address of every place he had ever lived. He was a great resource to his friends during senior moments.

David’s foremost love was his family.  He is survived by his wife, Gillian, who he adored through their 34 years of marriage. He was a proud and loving father to his children, daughters, Martha Jenkins (Michael Sullivan), Northampton, MA and Elizabeth McConahy Jenkins (Jack Ball), Louisville, KY; and son, David E. Jenkins III (Miki), of Guam (all with his first wife, the late Joan Churchward Jenkins).  He will be greatly missed by his three grandsons, Alexander, Nicholas, and Sebastian of Louisville, (especially during NCAA Basketball Tournaments); and granddaughters Emma and Kate of Northampton, who cherish memories of world adventures they shared together. David will also be missed by his many cousins, nieces, and nephews who he treasured.

The family would like to thank Jackie Washington who brought cheer to his mornings, the caring staff of Compassionate Care Hospice, Dr. Ted Bollard, his physician and confidante, and the many friends and family who supported us during our journey. Rest well, David, kind and gentle soul.

Memorial contributions may be made to a charity of your choice.

To view the memorial please click the following link:  https://www.youtube.com/watch?v=FbzAOuyJJ3Q&feature=youtu.be

To send a flower arrangement to the family of David E. Jenkins, Jr., MD, please click here to visit our Sympathy Store.