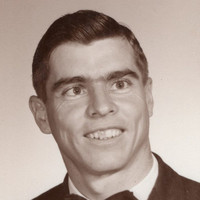 David H. Clark, 90, passed away peacefully on February 17, 2020, at home in Green Valley, Arizona, after a life of service and devotion to his Lord.

He was born David Henry Clark on March 24, 1929, to Calvin Clinton and Julia (Kennedy) Clark near Elk, Washington, the third of five children. The Clarks moved in 1930 to a valley off of Deer Valley Road, about 12 miles from Newport. David, his brother Robert, and sisters Faith, Patty, and Mary grew up there as the land was cleared for a farm and their father built a sawmill. They attended the one-room Deer Valley School, then Newport Elementary. David worked at the Clark Ranch until he was 22, when he went from farm to farm down in the Palouse country south of Spokane looking for a job. He found employment with the Hoffmans near Plaza and worked harvest for many years, along with tending the farm in Newport.

He had begun attending the Newport Assembly of God Church as a young man, and David felt the call to ministry in 1946. He graduated from the Hub City Bible Institute (now Trinity Bible College) in Aberdeen, South Dakota, in 1964. He also made his first overseas trip to Trinidad to help some missionaries.

The same year, while visiting Grand Forks, North Dakota, David met and fell in love with Patricia Harvey. They married soon after and moved to Buffalo, South Dakota, where David became the pastor. They traveled as missionaries to Fiji and visited Hawaii before returning to Ione and then Orofino, Idaho.

David and Pat had a baby girl, Beth, in 1968, and then a son, Larry, in 1970. They moved back to North Dakota in 1973, where David served as pastor of the Tioga Assembly of God for several years. After a short stint in Williston, the family returned to Washington, where they started a small church in Cusick. David also built houses, ran the family sawmill, farmed, and logged while Pat taught music at Cusick Elementary. They moved to Newport in 1986, where David resided until 2016.

Pat tragically died in a car accident in 1998. David married a longtime family friend, Doris Brudwick, a couple of years later and they continued to live in Newport. She passed away in 2003. In 2007, David married Leona Wood from Newport. They enjoyed many happy years and moved to Arizona to be closer to Leona’s family in 2016.

David was a pastor with the Assemblies of God Church for over 50 years. He was truly devoted to his ministerial calling and was always happy to be at the pulpit preaching the Word. David also loved taking long walks through the woods, farming, putting together jigsaw puzzles, discussing politics and cars, playing board games, learning about science and the latest technological advances, and traveling the world.

A memorial service will be held Saturday, March 7, 2020, at 11 a.m., at the Church of Faith in Oldtown, Idaho. Sherman-Campbell Funeral and Cremation Services in Newport is in charge of arrangements.  Family and friends are invited to sign the online guest book at shermancampbell.com.