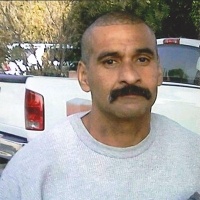 Our brother Danny Arellanes, also known as Crow, was raised in Montclair, California, the city he called home.  Later in life he moved to Santa Maria, and finally settled in Lompoc.

Crow comes from a big family; parents Leonard and Rosie Arellanes, five brothers Leonard Jr., Joaquine, Jesse, Paul, Albert, and six sisters Connie, Sarah, Gigi, Terry, Isabel, & Debbie.  He has a daughter Ariana, whom he loved very much, and numerous nieces and nephews, as you can imagine.

Danny was a kind and caring person who loved helping people anyway he could.  Whether it was yard work, cleaning houses, or washing your car, he would do it and wouldn’t ask for anything in return.

He is preceded in death by his parents, sisters Angie (Gigi) and Terry, niece Jessica, and nephew Paige.

His kind, loving and nurturing personality will be missed by all his family.

A Memorial Service for Crow will be held at Lompoc Valley Baptist Church on Friday, June 28, 2019 at noon.