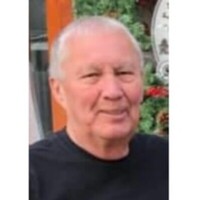 Charlie was born January 26, 1947, to Joseph and Olivia Sevilla in Los Angeles County, California.  He was married to his first wife Mary Lou Kennedy.  To that union were born Eric, Lisa and and Deborah.  Mary Lou passed away in 1995.

Charlie worked for the MTA as a bus driver for 30 years. He was very excited about moving from Canoga Park to the Lompoc area where he proudly purchased his first home in 2014.  It was his longtime dream to move from the busy San Fernando Valley to a life with a much slower pace.

Charlie married Marie Lorraine Fuster on April 15, 2015. They met in March 2013 when Marie got off work from Pantages Theater and the W Hotel – fate has it that she rode Charlie’s bus. They spoke for a little bit and then Charlie gave Marie his number.  After speaking with her children about a possible date, Marie met Charlie for lunch at Maggiano’s in Woodland Hills…and the rest is history.  They moved to Lompoc after Charlie’s retirement to settle down, they would go to mass every Sunday, driving to Solvang was one of their favorite past times, they loved spending time at the local library, eating at Applebee’s, walking at a local park, and of course attending HOA meetings.

Charlie was preceded in death by his parents and his brother Eddie.  He is survived by his wife Marie Lorraine Sevilla, his son and daughter-in-law Eric and Liz Sevilla of Ventura, California, his daughter and son-in-law Lisa and Gary Mercer of Lantana, Texas, his daughter Debbie Sevilla of Clearlake, California, and his brother Jimmy Sevilla of Northridge, California.  Charlie was also survived by his five grandchildren: Jett, Hannah, Samantha, Amanda, and Myles.  Through his marriage to Marie, Charlie gained more family – Arlene (Harold), April (Lester), Krystle, Karla, and the kids – Lori, Ian, and Eli.

To send a flower arrangement to the family of Charlie Sevilla, please click here to visit our Sympathy Store.