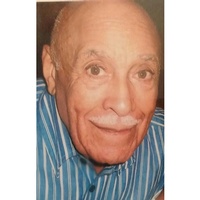 Charles H. Jones, 100, was born in Winston-Salem, NC on April 22, 1917 to Emma and CH Jones.  On October 9, 2017, Charles Jones was called home with loving family present after a courageous battle with Cancer.

Charles Jones, or “Cee Jay” as he was affectionately known, was raised in Winston-Salem and attended Talladega College in Alabama.  He moved to Harlem, NY in 1942 and joined the U.S. Marine Corps in 1943.  He was discharged from the Marine Corps in 1946.

He was preceded in death by his first wife, Thelma Morgan and second wife, Mavis Jones who he remained with until her death.

While in NY, he worked 39 years for the U.S. Postal Service where he ultimately became a supervisor and retired in 1982.  Upon retirement, he traveled and moved to Oak Bluffs, MA permanently in 1989.  He had visited the island for decades prior.  In Oak Bluffs, Cee Jay quickly became a town “fixture”.  He volunteered in the town’s information booth for over a decade, and as a crossing guard at Oak Bluffs Elementary School. He joined a number of island clubs and organizations and made a multitude of friends and admirers.  He became known as the “unofficial” Mayor of Oak Bluffs due to his pleasant demeanor, personal charm and knowledge of Martha’s Vineyard.

In 2012, for his military service, Cee Jay was awarded the prestigious Congressional Gold Medal - the nation’s highest civilian honor.

Funeral services will be held at 3:00pm Monday, October 16, 2017 at the Russell Funeral Home Chapel.  The family visitation will be held from 2:00pm until 3:00pm on Monday at the Chapel.

A summer memorial for August 2018 on Martha's Vineyard is being planned.

The family would like to give special thanks to his caretaker, Daija Britt.

To send a flower arrangement or to plant trees in memory of Charles Jones, Jr., please click here to visit our Sympathy Store.