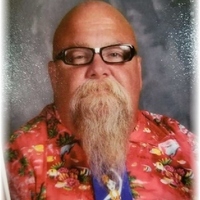 Charles “Bulldog” Emmons Garnett, 56, of Paris passed away unexpectedly on Wednesday, May 13, 2020 at his home.

He was born on May 24, 1963, in Mexico, the son of Billie Joe and Yvonne Morris Garnett.  Bulldog married Brenda Millsap on October 8, 1988 in Mexico, MO and she survives at home.  Other survivors include; four children; Rebecca (Scott) Wood, Michelle Garner, John Parker and Jimmy Forrester; one brother, Tommy (Nancy) Garnett; three sisters, Julie Ford, Patricia (Larry) Pardecooper and Geneva (Andy) Lattin; six grandchildren and one great-grandchild.  He was preceded in death by his parents and one sister, Brenda Speers.

Over the years, Bulldog was employed by Paris R-II School, Holliday C-2 School and Madison C-3 School as a bus driver. He was loved by the children on his bus routes and they were always excited to see him.  He, also, drove for Lakeland Behavioral Health System in Springfield, MO.  Bulldog formerly worked for Carman Chemicals and the City of Paris.

The 4th of July holiday always included making a trip to Bulldog’s Fireworks Stand, which he and his wife ran for 32 years.  If you never had a slab of ribs from Bulldog’s smoker, you truly missed out.  He was a wonderful pit master for 20 years.  Bulldog was a colorful character; you never knew what color his beard would be, which pair of sunglasses he might wear, or what color of balloon pants would be the choice of the day.

He was a member of the First Baptist Church of Paris, where he served as a Deacon for many years.  His faith and his church were extremely important to him.

Funeral services will be held at 2:00 p.m. on Monday at the First Baptist Church of Paris with Reverend Wesley Hammond and Pastor Andy Lattin officiating.  Visitation will be from 12:00 p.m. until time of service on Monday.  Burial will be in Walnut Grove Cemetery.

Memorials may be made to First Baptist Church Legacy Hall.

To send a flower arrangement to the family of Charles “Bulldog” Emmons Garnett, please click here to visit our Sympathy Store.